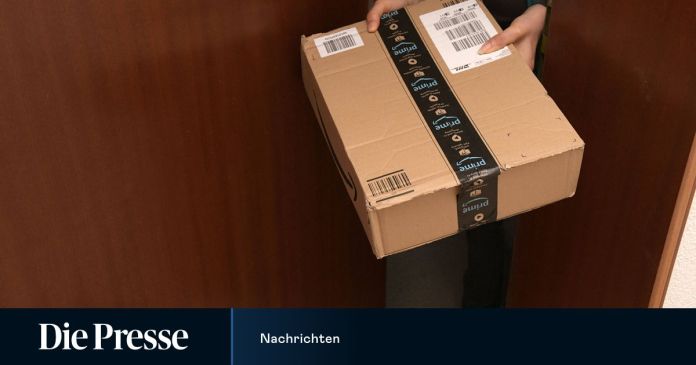 The CDU wants to finance an “inner city fund” with a fee for parcels sent by online retailers like Amazon. Trade is against it.

In the middle of Christmas business, an initiative from the CDU is causing a stir in Germany. The idea: a fee for parcels that online retailers send to their customers. This is intended to finance an “inner city fund” that will benefit stationary retail. This has been particularly hard hit by the corona pandemic with the shop closings. The coalition partner SPD supports the proposal. The FDP and especially the retail sector itself are not very enthusiastic.

The position paper “Pact for lively inner cities” from the CDU / CSU parliamentary group comes from the deputy chairman Andreas Jung and the local political spokesman Christian Haase. They advocate introducing a parcel fee for online trading, “the amount of which is proportional to the order value”.

“The levy is collected from the online retailer and paid by him to the tax office. With the income from it, online retailers share in the costs of municipal infrastructures used by them,” says the catalog of claims.

Jung and Haase justify the suggested levy, for which they do not give any specific figures, with the “imbalance compared to the stationary retail trade”, which could be eliminated as a result. The traders with the shops in the streets are already contributing significantly to the municipal budget with their taxes. The two CDU politicians want to use the money raised “in full to strengthen a diverse retail trade in lively inner cities”.

The German Trade Association (HDE) will immediately raise an objection. In relation to international online trade, it is above all about fair competition. “This does not require new taxes on parcels, but better controls to ensure that our local regulations for product safety and tax payments are also complied with for deliveries from the Far East,” said HDE General Manager Stefan Genth.

“A package tax would also affect many domestic online retailers who are correct and punctual taxpayers,” argued Genth. “In addition, that would be a disservice to the third of stationary retailers who have built up an online business.” These companies have already increased their online sales significantly and also used large Internet platforms. “The future of retail lies in the combination of online and stationary on-site,” summarized Genth. It doesn’t help to pit the sales channels against each other.

For the opposition FDP, a package tax would be “a new bureaucratic monster”. Rather, it is more important to give retail “a clear and reliable opening perspective for the next year,” said FDP parliamentary group vice-president Michael Theurer. During the shutdown, all retailers across Germany should be allowed to collect goods, he demanded.

SPD sees the proposal as positive

For the SPD, parliamentary group vice-president Achim Post commented positively on the union proposal: “A kind of corona levy from online retailers like Amazon can be a building block for more justice in the crisis and provide concrete support for local retailers.” Such an additional taxation of the online trade could “not be a substitute for a fundamentally fairer taxation of the Internet giants”. Their power threatens to grow further in the crisis.

In the boom in Internet sales, worries about the situation of employees are also growing. Since 2008, the number of employees in the mail order business has almost tripled from 60,022 to 161,331 in March 2020. According to the Federal Employment Agency, the median income of those fully employed in the mail order business last year was 2,663 euros gross per month – and thus 738 euros lower than across all sectors. This emerges from a response from the Federal Agency to a request from the left in the Bundestag.

Every third full-time employee in the mail order business accordingly worked at low wages with less than two thirds of the median salary, i.e. earned less than 2,267 euros gross per month. The proportion of low-wage employees was almost 15 percentage points higher than that of the total number of employees.

According to the Federal Agency, around 60 percent of the employment relationships that were started in the mail order business last year were fixed-term. Across all industries, this was only 40.7 percent. In addition, almost 29,000 mail order employees were still working as mini-jobbers in March.

Record perfect! Friedrich in the “blind flight” to the four-man...

Jeffree Starr has to comment on alleged affair with Kanye West