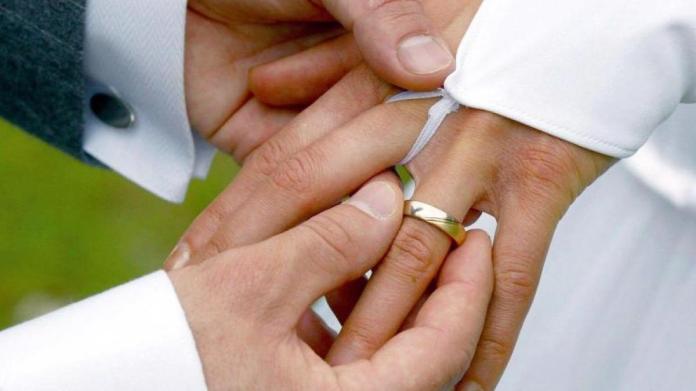 At the wedding, the groom puts on a wedding ring for the bride. Photo: Andreas Lander / dpa-Zentralbild / dpa

2020 was not a year of big celebrations. This also made itself felt at the registry offices in Berlin. Many wedding couples are now hoping for a break next year.

Berlin (dpa / bb) – In the Corona crisis, many couples in Berlin pushed their weddings into the year 2021 – but there are hardly any deadlines for the next year to be feared. This was the result of a survey by the German Press Agency in the districts of Berlin (as of mid-December). In the district office of Charlottenburg-Wilmersdorf there are even free appointments on days that are otherwise quickly booked up, such as on the Friday after Ascension Day, said district councilor Arne Herz (CDU). There is a “certain reluctance” among the newlyweds. One reason for this is the difficult search for a place. Many of the festival rooms are already booked for 2021.

In addition, many couples doubted whether they can make up for the wedding next year without worry, as the Association of German Wedding Planners observed. “That is why we have again an extremely high number of cancellations and rebooking,” said press spokeswoman Svenja Schirk. The uncertainty is great – with bridal couples and service providers. Many couples would have rebooked from 2020 to 2021. “Now these weddings are being postponed or canceled again, so that we no longer have a particularly high density.”

According to City Council Herz, it is not yet possible to predict how many Berliners will switch to the second half of 2021. Weddings could only be reserved six months in advance under federal law. In general, the second half of the year is more popular than the first. According to the head of the Tempelhof-Schöneberg registry office, Gordon Holland, December is generally very popular. Even in the Corona year, all appointments were taken shortly before the end of the year.

In Reinickendorf, wedding dates are still available on all wedding days for the first half of 2021, said District Councilor Sebastian Maack (AfD). Accordingly, there were 45 couples who would have canceled their appointments at the registry office in Reinickendorf. “Almost everyone wants to make up for the wedding in 2021,” said Maack. In Pankow, over 30 couples wanted to make up for their wedding in the coming year, said District Councilor Vollrad Kuhn (Greens). So far, only January is fully booked in the district.

In the meantime, a different crisis strategy was observed in Tempelhof-Schöneberg and Lichtenberg. “Some Berliners moved to Brandenburg in November because more guests were allowed there,” said Holland. In Lichtenberg, too, some couples have moved to other places, said a spokesman for the district office. In Charlottenburg-Wilmersdorf, on the other hand, couples wanted to catch up on their first wedding anniversary. But there were also couples who took the crisis as an opportunity to marry, such as older couples who had lived together for a long time without a marriage license, said City Councilor Herz.

But how much is the crisis affecting the statistics? In 2020 marriages were held in Charlottenburg-Wilmersdorf from January 1 to December 8, 1621. Less than the year before, City Councilor Heart said. In 2019, a total of 1807 couples married in the same period and in 2018 people tied the knot in 1981. In 2018 and 2019, the “marriage for all” had a positive effect on the numbers.

Compared to the previous year, about 260 fewer marriages were concluded in Mitte due to lockdown and the elimination of external weddings, said city councilor Ramona Reiser (left). In Mitte, all appointments are booked out by the end of the year. In Tempelhof-Schöneberg there were around 500 fewer weddings in 2020. In Pankow, the number rose from 829 to 973 so far – but this is due to the increase in staff, said District Councilor Kuhn. The number also increased in Lichtenberg.

The Wedding Planners Association warned of the closure of wedding service providers in the Corona crisis: Many companies and self-employed would have to give up, said spokeswoman Schirk. The aid often does not arrive, or comes too late, or is simply too little to get through another season without income. “Because there will be no“ normal ”season awaiting us in 2021 either.”

Vorarlberg and Christmas visits: The following entry regulations will apply from...

Buy PS5: That’s what Euronics says about the delivery situation and...