Frankfurt / Main (dpa) – Borussia Mönchengladbach is dragging itself towards the Christmas break with the last bit of strength but great morale.

You can find more news from Hessen here

Thanks to captain Lars Stindl, the team from Gladbach made it 3: 3 (1: 3) at Eintracht Frankfurt on Tuesday evening after they were 1: 3 behind. Stindl (90th / foul penalty and 90 + 6) saved the draw for heavily stressed Gladbachers in a wild final phase. The coach Marco Rose, allegedly courted by Borussia Dortmund, had seven new players in the starting line-up.

Stindl (14th) had put the guests in the lead, the strong André Silva (22nd / penalty and 24th) with his eight and nine goals this season and Aymen Barkok (32nd) turned the game first. Eintracht has been waiting for a win since the beginning of October. On Saturday, Borussia will play against Hoffenheim, while SGE will play in Augsburg – but without David Abraham, who saw the yellow-red card (81st).

Shortly before the kick-off, Gladbach’s sports director Max Eberl reacted calmly to speculations about his successful coach and the vacancy at Borussia Dortmund at the end of the season. At the moment the probability is “very high” that Rose will stay on the Lower Rhine beyond the summer, said Eberl at Sky, this is currently even “99 percent”. Subsequently, the sports director of the Champions League round of 16 saw a weak first half of his team.

The guests determined the initial phase. Defense chief Matthias Ginter, one of the few who had started against Hertha BSC (1-1) three days ago, missed the first chance to lead early (4th) and Stindl wonderfully converted a free kick from 22 meters straight into his fifth goal of the season. Eintracht, which had started eight Bundesliga games without a win, quickly found its way back into the game.

First, Stefan Lainer caused the hand penalty when Martin Hinteregger shot, which Silva converted confidently. 168 seconds later, the Portuguese hit after a quick free kick from Frankfurt deep from their own half against the surprised Gladbacher. And Barkok danced the defense of the guests in the penalty area with almost impressive nonchalance in front of his goal to make it 3-1. Rarely has Eintracht appeared so enthusiastically this season as in this phase.

Borussia felt the strain of the successful English weeks in the European Cup. Yann Sommer, who returned to the Gladbacher Tor after overcoming adductor problems, was always challenged. Silva missed the fourth Frankfurt goal in the 56th minute – as did the former Gladbacher Amin Younes free in the Gladbach penalty area (64th).

The Rose team struggled to make the game well into the second half. The Frankfurters remained the more dangerous team and waited for the final decisive goal. Stindl made the final phase exciting again, Barkok had caused the penalty kick – and then let his team cheer.
© dpa

Distance rules not complied with: Barriers installed on Semmering

“Soul”: Joe finally wants to be a jazz musician 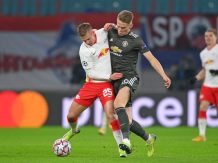 Leipzig in the round of 16 – racism scandal in Paris...

Mass tests: This is why Austria is satisfied, although every second...