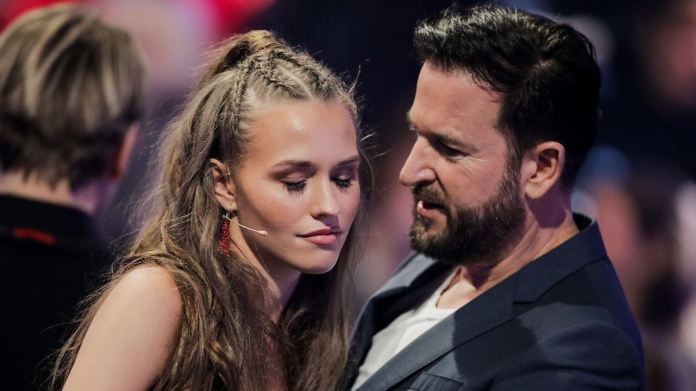 With the spread of corona conspiracies, Michael Wendler has maneuvered himself completely on the sidelines. At least professionally. Because the interest in the pop singer has not subsided. Only one German celebrity was more trendy in Google searches in 2020 – his wife Laura.
Has Michael Wendler been written off now? And what about the burgeoning career of his young wife Laura Müller? Many asked themselves these questions after the singer caused an uproar in early October. But the interest of Germans in Wendler and his Laura remains high, as Google’s annual review shows. However, the list does not generally show the most search queries, but rather shows the strongest increase in search interest compared to the previous year. So it shows who was trending in 2020.

In the popular RTL show “Let’s Dance” Laura Müller was not able to snatch the crown this year, but the influencer was more popular this year than all her competitors at the time. Although Müller only ranks fourth among the personalities with the greatest increase, she is also the first German on the list – and right behind in fifth place is her husband.

What made it so popular

At the beginning of the year Müller adorned the cover of the men’s magazine “Playboy” – and with great success. When the US “Playboy” announced in March that no more regular print editions would appear in the future, the German edition declared that in this country “more emphasis should be placed on printed magazines”. At the same time it was announced that Müller was apparently also a reason for this decision. With her as the title star on the February issue, the German “Playboy” was able to significantly increase its “kiosk sales since the beginning of the year,” it was said at the time. In comparison, the magazine has sold almost twice as well as the previous year’s edition.

In addition to her TV dance performances and the shooting, another factor in Müller’s popularity in the search queries was probably the scandal about her husband. Michael Wendler not only surprisingly announced his end in the jury of “Germany is looking for the superstar”, but also shot against German TV stations and spread strange conspiracy myths about the corona virus.

The remaining celebrities in the ranking

About RTL and advertising partners like Kaufland distanced themselves from the singer’s statements. The Wendler manager first ended his collaboration with the 48-year-old and later also with Müller. There was speculation on the net whether the pop singer had buried his career – and that of his wife – with it. Despite possible negative effects and numerous speculations about separation, Müller continued to stand by her husband. A few days after Wendler’s original message, she asked in an Instagram story what kind of wife she would be if she abandoned him now. At the same time, this does not mean that as a couple you have to have the same opinion on everything. When it comes to Corona, she is “like Switzerland” because she is “neutral and apolitical”.

Among the personalities with the strongest increase in search queries, the elected US President Joe Biden has the lead. This is followed by the Prime Minister of the United Kingdom, Boris Johnson, and North Korea’s Head of State Kim Jong-un. After Müller and Wendler (fourth and fifth place), Biden’s vice-president Kamala Harris, conspiracy narrator Attila Hildmann, TV star Claudia Obert, Austrian actress Sonja Kirchberger and still-US first lady Melania Trump secured the other places. US President Donald Trump, who is leaving office after Biden’s inauguration, does not occupy any of the top ranks. The search for Trump had already intensified.

“Some patients from the first wave are still severely restricted”

Arson at the Kurt-Schumacher-Haus – the police are looking for this...