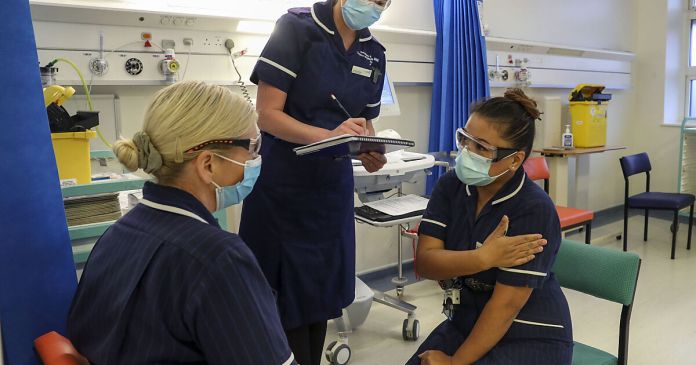 At the weekend, boxes with the first vaccine doses arrived, including in a hospital in south London. The vaccine from Biontech and Pfizer poses a logistical challenge for the authorities, as it has to be cooled at minus 70 degrees Celsius.

Fly in vaccine on military aircraft

If necessary, the British government wants to fly in the preparation produced in Belgium with military aircraft so that it does not get stuck in the feared Brexit traffic chaos. From Tuesday – already euphorically referred to as “V-Day” (V for “Vaccination”, in German: “Vaccination”) by the British Minister of Health – people over 80, employees in nursing homes and particularly vulnerable medical staff will be vaccinated.

Vaccinated persons receive a vaccination card as proof, which is also intended as a reminder of the second vaccination appointment around three weeks after the first.

For the majority of the population, however, it will be well into the new year before they can be vaccinated, the national health service NHS said. Larger vaccination centers – for example in football stadiums – should only be opened when larger quantities of the vaccine are available. The vaccination program will be “a marathon, not a sprint,” said NHS chief Stephen Powis. Government medical advisor Chris Whitty hailed the start of the program, saying it felt “like the beginning of the end”.

Great Britain had rushed ahead last week and was the first country to give the vaccine from the Mainz company Biontech and the US pharmaceutical company Pfizer an emergency approval. In total, the country has ordered 40 million doses of the vaccine – enough for 20 million Britons, which is a little less than a third of the population.

The important decision on approval of the Biontech / Pfizer vaccine is also expected from the European Medicines Agency EMA in December.

Max Kruse is out for a long time after injury in...

“Claudia’s House of Love”: These are the candidates for the show!

Official vaccination start in Germany and in the EU

Bomb in Geesthacht will be defused – it will take |...