According to Prime Minister Boris Johnson, the new variant of the corona virus discovered in Great Britain is up to 70 percent more contagious than the known form according to initial findings. But there is no evidence that vaccines are less effective, Johnson said on Saturday. “There is still a lot we don’t know. But there is no evidence that the new variant causes more or more severe disease processes. ”

The top scientific government adviser Patrick Vallance emphasized that in December 60 percent of the new infections in London affected the new variant. “It is spreading rapidly and is becoming the dominant variety,” he said.

He could imagine that the mutation also existed in other countries, but a major outbreak in Great Britain in any case. “It could have started here, but we don’t really know,” said Vallance.

Because of the coronavirus mutation, the government tightened the restrictions for London significantly from this Sunday. “If the virus changes its method of attack, we will have to change our method of defense,” said Johnson. The previously three-stage corona warning system has now been expanded to four – including the capital, other regions in the south-east.

There, residents are only allowed to leave their homes for important reasons, such as going to the doctor or going to work. Even at Christmas you shouldn’t meet members of other households, emphasized Johnson. “We can’t spend Christmas as planned.” All non-essential businesses and other facilities such as fitness studios or beauty salons have to close. Residents of the highest Corona level 4 are not allowed to leave this zone.

Most recently, scientists in South Africa discovered a new variant and forwarded their research results to the British authorities. The 501st V2 variant could be behind the rapid spread of the second corona wave in the country, said the South African Minister of Health Zwelini Mkhize on Friday.

According to South African doctors, more younger people became infected during the second wave than before. The new virus variant was discovered by a research team led by the South African Kwazulu-Natal Research Innovation and Sequencing Platform (KRISP), which had examined hundreds of samples since the beginning of the pandemic. It still seemed unclear whether the disease progression was more severe with the new virus variant.

It is also not yet clear whether the appearance of the new variant will affect future vaccinations. However, the government’s previous strategies should not be changed. Health Minister Zwelini Mkhize said on Twitter on Friday that the vaccination program would be maintained as long as there were no new findings.

There will be no additional measures, Mkhize wrote. He appealed to the youth to wear masks, follow the hygiene measures and find alternative ways to spend the holidays.

The World Health Organization is in contact with the researchers from South Africa. According to WHO expert Maria Van Kerkhove, there are no indications that the new variant behaves differently than the ones already described.

The government in South Africa imposed a nationwide exit restriction in late March to contain the spread of the virus and tightened it again slightly after a temporary withdrawal at the start of the holiday season. South Africa is one of the countries in Africa hardest hit by the corona pandemic. By Friday, more than 900,000 people in the country with its almost 60 million inhabitants were infected with the virus and more than 24,000 died. (Tsp, dpa)

Riccardo Simonetti had his first relationship at the age of 27

Migration towards the USA: Mexico deploys troops on the southern border

Lego Technic at Lidl: 20 euro model as a bargain tip? 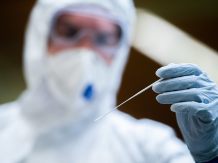 Germany is breaking new ground in employee participation in startups