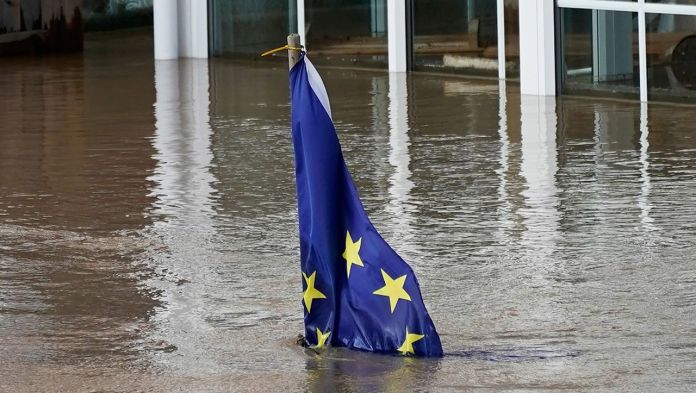 It is clear backing for Ursula von der Leyen’s climate policy: The heads of state and government voted on Thursday afternoon to raise the EU climate target from minus 40 to “at least” 55 percent compared to CO2-Emissions from 1990. A whopping increase of 15 percentage points, which must now be distributed to 27 member countries.
The initiative goes back to the Green Deal by EU Commission President Ursula von der Leyen. The former Federal Defense Minister has only been in office for a year. It has achieved what most politicians in the EU have been reluctant to try for the past 30 years: to put a consistent climate policy in place.
The task is huge: Von der Leyen’s Green Deal policy is to save a further 30 percent of EU greenhouse gases within just ten years. In the past three decades, however, the Union has only reduced around a quarter of its emissions. A large part of it was lost due to the loss of particularly dirty industries of the former Eastern Bloc. Today, however, the savings have to be worked hard: not by eliminating them, but by converting industry, transport, the construction sector and agriculture.
In March the EU Commission presented the Union’s first joint climate law. It stipulates that the EU must be climate neutral from 2050. The bottom line is that greenhouse gas emissions must then be zero. Because the old EU climate target of minus 40 percent by 2030 is not sufficient for this, a more ambitious interim target had to be found. That is why the head of the commission proposed the new climate target back in September. The EU Parliament then even demanded a reduction of 60 percent and individual environment ministers from Denmark and Sweden even want a reduction of 65 percent. In the end, von der Leyen prevailed.
In the night from Thursday to Friday, Poland and the Czech Republic in particular blocked the target increase. The reason was not the goal itself, but the expansion of emissions trading. Since 2005, industries and energy suppliers have had to buy so-called pollution rights for the emission of CO₂. Poland reportedly wanted more money to compensate for its losses. The other countries would have blocked that.

But there is a critical point: The resolution speaks of “net domestic reduction”. So the 55 percent are only net. Translated, this means: the real savings will probably be less. So-called sinks, i.e. reforested forests or the renaturation of moors, can also be included in the target. It now depends on how high the proportion of CO2– Lowering will be the overall goal. The amount of directly saved greenhouse gases is reduced accordingly.

Anyway, sinks are controversial. In the case of reforestation, for example, forest fires can still occur years later. Then the counted CO2– Reductions lost. Other ways, such as the underground storage of CO₂, are banned in Germany and are still very expensive. However: “Without lowering, climate neutrality cannot be achieved,” says Oliver Geden from the Science and Politics Foundation (SWP). Basically, it makes sense to think about the sinks from the beginning, but there should be a maximum in the counting.

It is no coincidence that the decision on the climate target will be made this Thursday: it is certain that the minus 55 percent will be reported on Saturday at the UN’s Climate Ambition Summit. Government representatives from 70 countries want to speak at the summit in order to promote ambitious climate targets five years after the agreement on the Paris Climate Agreement – or to announce new ones themselves. Since the previous climate plans are not sufficient to meet the treaty’s goal of staying below two degrees of average warming, the countries have to increase. In the past few months, some states have rushed ahead with hefty increases in their targets, including Great Britain, the host of the next UN climate conference. The British want their CO2– Reduce emissions by 68 percent by 2030. By way of comparison: Germany is targeting minus 55 percent.

Climate experts see the fact that the EU is now entering the negotiations with a substantial increase as an important signal. Other countries could also be motivated for more climate protection, so the hope.

“With this decision, the EU is sending a strong signal to the international community that it wants to live up to its pioneering role in climate protection,” says Brick Medak from the British think tank E3G. Actually, according to the status of climate research, it should be at least 65 percent. Nevertheless, the EU goal is »a big step in the right direction«.

What else is in the climate law?

With the Council’s agreement on the 55 percent target, however, strictly speaking, neither the climate law nor the climate target have been decided. From a formal point of view, both are part of the trialogue – i.e. the current negotiations between the EU Parliament, the EU Environment Ministers and the EU Commission. An agreement is expected in March at the earliest.

“The heads of state and government have always decided on EU climate targets alone,” says climate policy expert Geden. “With today’s decision and the announcement on Saturday, the member states are creating facts that Parliament can no longer ignore.”

People in parliament are actually quite angry: “While Europe has been shaken by the climate crisis and the rule of law is being crumbled by populists, heads of state and government are selling our future through crooked compromises,” says Michael Bloss, Green Member of the European Parliament. For months he had fought for an increase to 60 to 65 percent. “What we need is a new culture of negotiation that science is finally taking seriously. The EU Parliament is miles ahead here. ”

Some experts suspect that parliament could demand something for this in other parts of the law. Negotiations are, for example, the establishment of a scientific climate advisory board, as the federal government is planning. Discussions are also ongoing as to who determines what exactly are climate sinks and which ones could be taken into account and how progress in the individual countries should be monitored.

There is still a lot to be done regarding the Green Deal: For example, the EU Commission wants a proposal for a CO by next summer2– Submit border tax against the emigration of industries and advise on the expansion of the current emissions trading. So the reconstruction of Europe is only just beginning.

The dispute over the Green Deal does not end with today’s agreement. Because not everyone happily agreed to the climate target. The group of Eastern European countries is anything but enthusiastic. There are many old power plants and CO in Poland, the Czech Republic, Hungary, Romania and Bulgaria2-intensive industries. Rebuilding them or replacing them with renewable energies will be a feat for which the countries want to see a lot of money from the EU.

On Wednesday, the European Parliament and EU Council representatives agreed on the “Just Transition Fund”. The is to provide millions in aid for the green conversion in Eastern Europe. In total, the fund is now 17.5 billion euros. According to Brussels circles, these countries would never have moved without the money. Until recently, there was still a dispute over the modernization fund, which is also supposed to provide money for the energy transition. The extent to which the losses that countries like Poland are making through stricter emissions trading are offset with this fund is also to be renegotiated. Because of this paragraph, the 27 heads of state and government got little sleep last night.
In addition, there had been speculation about an “atomic clause” beforehand. Some countries like the Czech Republic want to build new nuclear power plants. In the long term, they hope that the CO2-low nuclear power will at some point be considered a contribution to climate protection and could be promoted by the EU. The Eastern Europeans, together with the atomic nation France, negotiated the phrase “innovative climate-neutral technologies” in the text.

Oliver Geden believes that this has no influence on future subsidies. “Pro-nuclear states like the Czech Republic and Hungary try to include appropriate wording in the final document before every EU summit,” says Oliver Geden. “Luxembourg and Austria then try to weaken it again.”

But the gas industry has achieved the greatest lobbying success. Unlike nuclear power, gas is named as a bridging technology in the draft adopted today. This means that the expansion of the European gas network can also be justified with climate protection.

With regard to Brexit, all signs point to an early agreement

CTS Eventim is relying on a new start for major events...

The rush of visitors in the Harz region causes traffic chaos...

The Federal Council wants to reform the 2nd pillar