Eco party sets itself an ambitious goal for Frankfurt and the other major Hessian cities. The party leadership appeals to the climate movement

The Greens are moving into the Hessian local elections on March 14, 2021 with an ambitious goal. They want to become the strongest political force in the five major Hessian cities.

The state chairmen Sigrid Erfurth and Philipp Krämer announced this on Wednesday at an online press conference in Wiesbaden. Five years ago, the Greens only left the other parties in Darmstadt. In Frankfurt, Offenbach, Wiesbaden and Kassel, on the other hand, they came in third behind the CDU and SPD.

Nationwide, the eco party wants to reach second place. The state elections in 2018 and the European elections in 2019 had shown that this was possible, stated Erfurth. The slogan of the Greens campaign is: “Let’s create the future together”.

During the protests against deforestation in the central Hessian Dannenröder Forest, the Greens experience headwinds from parts of the climate movement. Activists, including from within their own ranks, accuse them of not having done everything to stop the construction of the autobahn and police operations.

Krämer appealed that it was “absolutely necessary that we stand together as an ecological movement”. In the future, it should no longer be possible for a healthy forest to be sacrificed for a motorway.

“Should now open restaurants as a test” 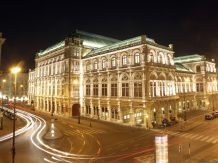 State Opera in Vienna opens as a museum and continues streaming...