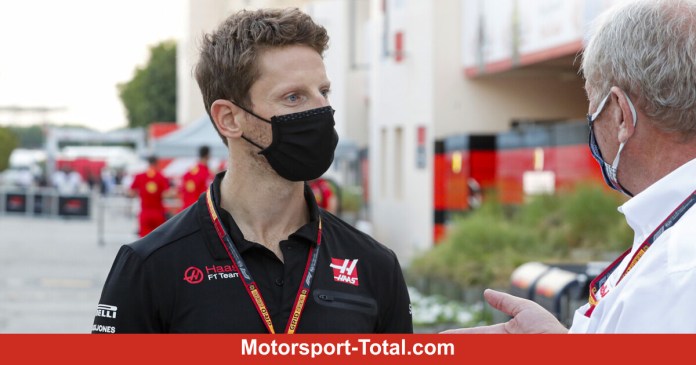 In Abu Dhabi, Pirelli prototypes for the 2021 season will again be tested on Friday. Before that, the pilots had already ridden the new tires in Bahrain and Portimao. Next weekend, in the second free practice session, the teams will drive one set of the C4 mixture per car for at least eight timed laps. Two sets of the C3 mix were tried in Bahrain.

Most of the feedback from the drivers about the new tires was negative.

Formula 1 under the bell jar

My colleague Adam Cooper is in Abu Dhabi and gives insights on Twitter how strictly the corona measures are being interpreted in the emirate. The entire premier class is located in its own “biosphere” and is not allowed to leave a certain area.

All details about the strict measures can be found here!

Speaking of George Russell – the Briton showed courage in the race last Sunday and conceded Valtteri Bottas on the track in a fair duel with this remarkable maneuver. Strong!

Williams has admitted that the team missed George Russell in Sachir last weekend. It was the right decision to borrow the British, but “we missed George, not only because of his pace, but also because of his instructions in dealing with the car and especially the tires,” explains Williams team boss Simon Roberts.

The wealth of experience that Russell was able to gain in just two years in Formula 1 is enormously valuable, he knows. “But Latifi and Aitken did a good job.” Although Russell’s experience in the Mercedes Williams will enrich it, this will not “immediately transform our car into a Mercedes”.

We have a new video for you! Toto Wolff was a guest at a media talk on Sky a few days ago, and we received the video material from the broadcaster. You will find out, among other things, why George Russell had bloody fists or how the Mercedes team boss assessed the situation of Valtteri Bottas. Do not miss!

Yesterday we already talked in the live ticker that Valtteri Bottas deleted the link to Mercedes from his profile description on Instagram. Today the team reacts humorously to the speculations. Likewise Red Bull …

No use of Sainz for Ferrari

Apropos Young Driver Test: In the run-up, a “puppet theater” took place, as Sebastian Vettel described the hiccup. Specifically, it is about the controversy surrounding Fernando Alonso. Renault was able to obtain an exemption from the FIA ​​for the two-time world champion. Originally, the test after the season finale was only intended for young rookies.

But Renault was able to convince the FIA ​​that Alonso needed the test in preparation for his comeback, due to his two-year absence. Therefore, the world association made it clear that every driver who has not contested a Grand Prix in 2020 can participate. That’s why Red Bull can also use Sebastien Buemi, or, as has just become known, Alfa Romeo Robert Kubica (alongside Callum Ilott).

A Sato back in Formula 1

AlphaTauri has also announced the line-up for the Young Driver Test. Yuki Tsunoda, who is traded as a promising candidate for the cockpit of Daniil Kwjat, was confirmed yesterday. A second Japanese will also be deployed: Marino Sato. The 21-year-old is not related to ex-Formula 1 driver Takuma Sato.

“I am very happy that AlphaTauri gives me the chance to drive a Formula 1 car. We will try to complete as many laps as possible so that I can get used to the car quickly and learn the most.” A dream come true for him.

Red Bull: Vips is involved in the Young Driver Test

Red Bull has just announced that Juri Vips will make his test debut with the top team in the Young Driver Test next week. The Estonian has been part of the Red Bull junior squad since 2018 and was in Formula 2 this season. In addition, test pilot Sebastien Buemi will be used in a second car in Abu Dhabi.

“I am extremely grateful for this opportunity Red Bull is giving me,” said Vips. “This will be the first time for me to drive a current Formula 1 car.” Buemi explains: “I haven’t been in the car since the Pirelli test last year at Silverstone, so the Abu Dhabi test will be important to me.” He works a lot in the simulator and will now be able to make better comparisons thanks to the test in the real car.

Sad news comes from Austria today. Walter Lechner died at the age of 71 after a serious illness. He was a passionate racer, took part in the 24 Hours of Le Mans and celebrated dominant successes with his teams in the Porsche Supercup. Lechner, who was born in Vienna in 1949, was a fixture in Austrian and international motorsport.

He founded the Walter Lechner Racing School in 1975, for which the future Formula 1 driver Roland Ratzenberger and AlphaTauri team boss Franz Tost worked as instructors. He recognized Stefan Bellof’s talent and put a certain Toto Wolff in a Formula Ford car. He leaves two sons, Walter jun. and Robert Lechner, who works as a Formula 1 expert at ORF.

Haas: Resta will take on a leading position

A few days after the announcement of Nikita Masepin and Mick Schumacher, Haas confirmed that Simone Resta would join the team from Ferrari. It is not yet certain what role the engineer will play. The team has already stated that it will be a “leading position”.

The arrival of Resta is expected to strengthen the Haas engineering department. The Italian has been part of the Ferrari family since 2001. In 2018 he was Technical Director at Alfa Romeo before being brought back to the top team. “We will first define his exact position. We are restructuring the team on the technical side because we have fallen behind a little,” explains Günther Steiner.

Psychological support after the crash

In order to come to terms with what happened, Romain Grosjean has not only medical but also psychological help. He has been working with a psychologist for eight years. On the Tuesday after the accident, she was at Grosjean to work with him on the process. “She said we have to deal with this very early in order not to experience any nasty surprises. I haven’t had any nightmares or flashbacks yet.”

He will especially work on the fact that he has caused other people suffering with it. “We’ll work on that.” Grosjean has also received a lot of support from his colleagues. Sebastian Vettel, Kevin Magnussen, Esteban Ocon and Alexander Albon visited him in the hospital.

Grosjean is already back in the simulator!

One and a half weeks after his serious fire accident, Romain Grosjean is already back behind the wheel in the simulator at home. He’s trying to train for a sim racing series. In addition, his Instagram account is intact again after the hacker attack. Running!

By the way, in this video we have worked out in detail all aspects relating to Romain Grosjean’s accident. The focus is of course on security, which has improved significantly over the past few decades. Exciting insights!

F1 safety: the analysis of the Grosjean accident in Bahrain

The Formula 1 safety concept has done a great job: In the video we analyze the accident damage to the vehicle from Romain Grosjean to Bahrai More Formula 1 videos