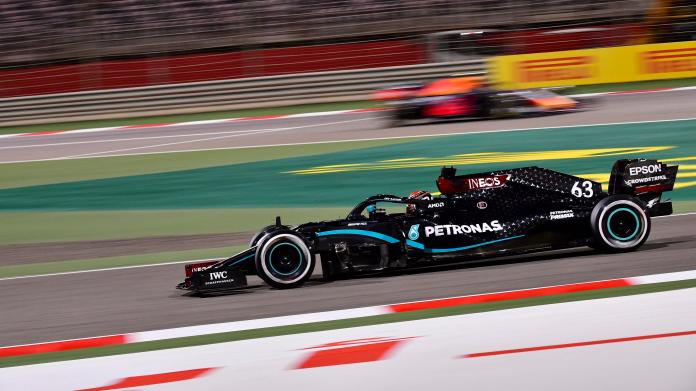 Russell the measure of all things again

George Russell gave the regular Mercedes driver Valtteri Bottas another roast during the 2nd free practice session for the Sakhir GP in Bahrain (Saturday and Sunday, live on RTL and online on TVNOW). After his best time in session 1, the substitute for Lewis Hamilton, who had Covid-19, also slammed the fastest lap in the 90-minute evening shift. In the video above, RTL expert Christian Danner rates the Russell show. And here is Russell talking about his appearance.

In 54.713 seconds, the young Briton was more than a tenth of a second faster than Red Bull driver Max Verstappen on the 3.453 km long outside slope of the Bahrain International Circuit. Sergio Perez took 3rd place in Racing Point (+0.153 seconds), Bottas only finished 11th.

The Finn is likely to brood after the start of the second Bahrain weekend: Even without the overpowering Hamilton, Bottas only played second fiddle at Mercedes. Sometimes it even seemed as if the otherwise so balanced and actually so strong World Cup runner-up was showing nerves.

Again and again Bottas had blunders in his attempts, never really achieved a clean lap on the Bahrain “Oval”. The gap of 0.6 seconds to Russell, who is driving in the Silver Arrow for the first time – a resounding slap in the face!

At Ferrari nothing came together again: Charles Leclerc hobbled after a quarter of an hour with a battered one prancing Horse in the garage – a problem with the drive shaft. The Monegasse finished early and was the only one not to make a timed lap.

But maybe Leclerc won the big Friday ticket. Scuderia colleague Sebastian Vettel (16) couldn’t get his jumping horse under control at all. First, Vettel’s tail broke out when accelerating out of Turn 2, later it hit him in Turn 5: The Scuderia driver shot across the piste into the desert gravel bed with screeching tires, and was lucky that Haas driver Kevin Magnussen didn’t get into his car crashed.

“It’s hard to get a lap together, I’ve already lost the tail several times,” complained the 33-year-old on the radio.

The Sakhir trainings in the video

McLaren’s transmission is on strike

There were also problems at McLaren. Lando Norris (only 17th place) first planed the underbody on the relatively high curbs, later he rolled into the garage with gearbox misfires. Team mate Carlos Sainz (10th place) also had problems shifting gears.

McLaren wrestles with Racing Point and Renault for third place in the team championship. In the second practice session – as in session 1 – the rivals made a much better impression than the traditional team from Woking.

New supercapacitors can greatly reduce the load on (car) batteries