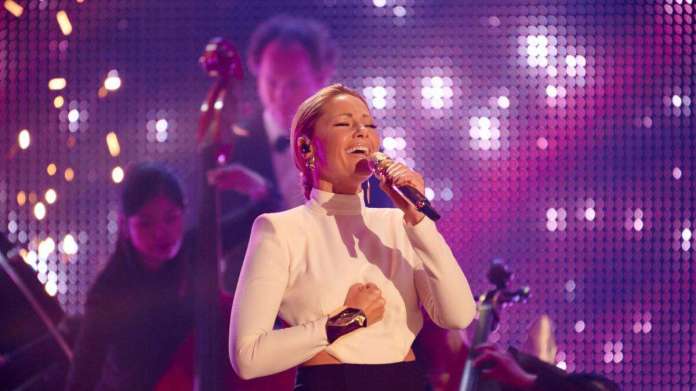 On December 25th, 2020, Helene Fischer presented her ZDF replacement show “The Helene Fischer Show – My Most Beautiful Moments”. A message after that could disappoint the Schlager queen.

Update from December 27th, 1:06 p.m.: War Helene Fischer 2020 not good enough? At least the Schlager princess should have wished for higher ratings from Santa Claus. The „#Helene Fischer Show“ on Christmas Day in ZDF numerically could not quite match the success of last year. Although switched on Friday, according to dpa on average 4.3 million viewers one, but in 2019 it was 5.9 million. The tenth Fischer show, however, came out of necessity from the can: the corona virus prevented a major live show, and ZDF decided to look back with cuts. In this respect, the disappointment was to be expected.

Sad should Helene Fischer but still not be. After all, it has hers Show not only made it to the screen despite all the circumstances, with 14.5 percent it still reached the on December 25th at 8:15 p.m. most viewers im German television. Helene Fischer only expresses one wish on Instagram: “I really wish from the bottom of my heart that I never have to stand in an empty hall again”

First report from December 26th: Düsseldorf – It has been a tradition at Christmas since 2011: The “ Helene Fischer Show” on ZDF. In the Corona year 2020, the Schlager Queen is leading Helene Fischer on Christmas Day at 8:15 pm, however, with a “replacement show” based on the last nine years and looks back on the most successful moments of her career. “The Helene Fischer Show – My most beautiful moments“.

After Helene Fischer a longer break and really enjoyed the normality away from the media, the fans look forward to you all the more Appearance of their hit star on TV. Just recently she caused a stir again with her appearance on Günther Jauch’s annual review on RTL.

In the run-up to the coming TV show some details were already known about how the show would run. Now the station also published Pictures with the presenter. And der Look has it all! Helene Fischer sparkles in one at Christmas red sequin dress to the bet. In an interview with image reveals the singer: “He’s got the dress Hamburg fashion designer Sascha Gaugel Designed by Hausach Couture in consultation with me. His outfits can be seen in almost every show since 2013 and have become an integral part for me. I always feel very comfortable in his clothes and they represent me best on the ‘ Helene Fischer Show’. “

Comment on Instagram Helenes Fans: “ This smile, this dress, the woman is just amazing”,
“#Omg how beautiful is this woman please?” And “ This outfit!” With a big, red heart.

“The Helene Fischer Show” (ZDF): Only two presentations with Helene!

They could be a little disappointed Spectators: inside however, be from the fact that Helene Fischer your Moderation in advance recorded in an empty hall – and they are only two pieces. “ Even if there were only two short presentations that we recorded, I very much hope that, despite everything, my joy about the following highlights can be transferred to the audience on Christmas Day”, Helene Fischer told picture to.

In your review the pop singer will be hers Relive favorite moments again What is not that easy to choose from a well-known top star like Helene Fischer. After all, she has experienced a lot and great duets sung. Among other things, appearances will be with Luis Fonsi, Tom Jones and Peter Maffay be visible. “I then chose what touched me and, in my opinion, touched the audience the most and what the viewers would still enjoy watching today. The last word always had my gut feeling“, She comments on her compilation.

Helene Fischer: “ Pure goosebumps for me”

Helene Fischer’s personal highlight but is different: “And yet one show moment sticks in my mind, namely the last TV appearance by Udo Jürgens. I will never forget what that moment triggered in me when I sang his song ‘#Merci Cherie’ for him and he let his feelings run free. It was unexpected and therefore so deep touching moment between the two of us. That is until today Pure goosebumps for me. “The singer died in 2014 at the age of 80. In Helene Fischer’s show, he sang two of his songs with Helene Fischer just ten days before his death. (jh)

Elliot Page: The first trans man on the cover of Time...

Again the police have to break up a larger event –...

Fools in RP adhere to Corona rules on Horse Monday –...

Corona numbers will fall due to tough lockdown Pandemic is “out of control” in Mallorca