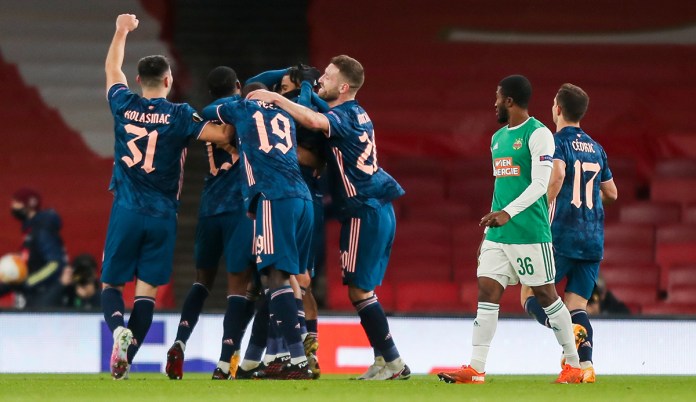 There was nothing to get for SK Rapid in London. The Hütteldorfer were defeated by Arsenal 1: 4. Lacazette (10th), Mari (18th), Nketiah (44th) and Smith-Rowe (66th) and Kitagawa (47th) scored the goals. Here are the highlights of the game in the video.

After ten minutes the doorbell rang in the Strebinger gate. Lacazette (10th) pulled from a distance, the flutter ball deceived the rapid goalie and loaded him into the wrong corner. A little later, Arsenal expanded their well-deserved leadership. A corner ball from Nelson was picked up by Mari (18th), who headed the ball into the corner. Before half-time the doorbell rang again in the Rapid box. As a result of a wonderful pass combination that was reminiscent of Wenger times, Nketiah (44th) carried out the 3-0 break.

In the second half, Rapid came out of the cabin more courageously. Offensive you became dangerous, which paid off. Demir refueled on the left and failed to Arsenal keeper Runarsson. The ball came to Arase as a result of the save, whose margin was blocked twice by Kolasinac. Kitagawa had attempt number four in the curious offensive action (47th). The Japanese withdrew by volley and scored afterwards. The momentum forward did not last long. Arsenal got stronger and came to more high-profile players. Then it happened: Smith-Rowe (66th) pushed the thing over the line after a nice combination.

Trump & Co. on the screen: How Hollywood settles accounts with...

Why Mick Schumacher suddenly has stress with his teammate

Pichler apologizes to Ingolitsch: “Was not an intention”