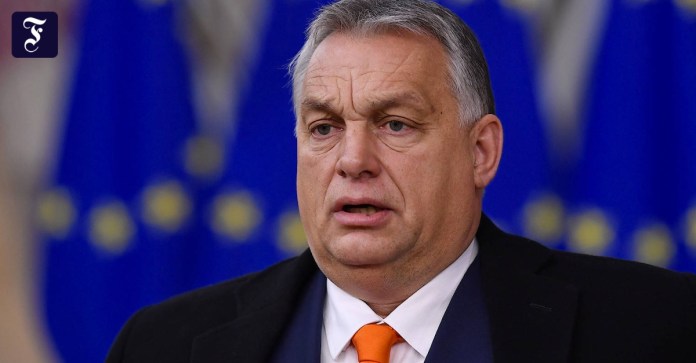 FThe compromise proposal in the EU budget dispute that the heads of government are negotiating at the summit on Thursday afternoon is a “victory” for Prime Minister Viktor Orbán for the Hungarian government and the domestic press that is close to it. It is about the accompanying declaration on the rule of law mechanism negotiated on Wednesday between the German EU Council Presidency on the one hand and Hungary and Poland on the other hand, which is to come into force together with the 1.8 trillion EU budget package.

The two countries had previously rejected the mechanism as a “political instrument” allegedly directed against them and threatened to veto the budget. The declaration clarifies what is already provided in the rule of law mechanism, that it is only about the protection of the Union’s financial interests from fraud, corruption or conflicts of interest. In addition, it should only come into force after the European Court of Justice has ruled on it. For Hungary, the latter point is important because it could mean that this will not be the case before the parliamentary elections in spring 2022.

“We won because we fought for national interests,” said Foreign Minister Péter Szijjártó. Had that not succeeded, according to the politician of the national-conservative Fidesz party, “Brussels would have decided that we either have to accept illegal migrants or have EU money withdrawn”. The leader of the Fidesz MEPs, Tamás Deutsch, also rejoiced: “Hungary has won.” Orbán had managed to reach an agreement through which community money could not be linked to conditions. Justice Minister Judit Varga (who extended the “victory” to the “friendship between Poland and Hungary”) found the deal to be in line with the European treaties. It “respects our national identity and offers protection against political blackmail”.

Hungarian media close to the government took up the interpretation of a “great victory” (according to the online portal Origo). However, even in the media critical of Fidesz, the assessment that Orbán has prevailed prevails. If the compromise proposal prevails, the prime minister will have a free hand until the election year 2022, wrote the newspaper Népszava, which is close to the Socialist Party. The left portal 444 also ruled that Hungary and Poland had got what they wanted, while the European Parliament had forfeited almost everything that it had “put” into the mechanism. The online portal 24.hu writes that it once again looks like Germany will only care about the rule of law until the economy is in danger. For Orbán it was only important that he did not lose any EU money until 2022.

Opposition politicians, however, see Orbán’s failure. The politician of the left-wing liberal DK Klara Dobrev pointed out that Orbán had stated that he only believed in legal guarantees against the rule of law mechanism, but that he did not get them. The socialist MSZP took a comparison from Orbán’s favorite sport, football: the prime minister merely “hit the bar”. The right-wing Jobbik party also asked whether Orbán was fooling himself: “What kind of demands could he achieve that the government can judge as a victory?”

Justice Minister Varga had justified the Hungarian resistance to the rule of law mechanism – among other things in an interview with the FAZ – on the one hand with the fact that the conclusion of a majority decision violated the European treaties, which required unanimity for such fundamental changes. On the other hand, the government in Budapest had assumed that the mechanism should serve to break the Hungarian resistance to a more generous immigration policy. There is no mention of migration in the rule of law mechanism, nor of family policy and rights for homosexuals, which was the main reason the Polish government had justified its resistance.

B.1.1.7. spreads: six questions and answers about the new coronavirus...

Biathlon World Cup in Pokljuka: Arnd Peiffer only twelfth in the...

Von der Leyen declares the vaccination war on the British

Sleet in Berlin and Brandenburg

Lockdown culture tip: FM4 celebrates its birthday on the radio and...