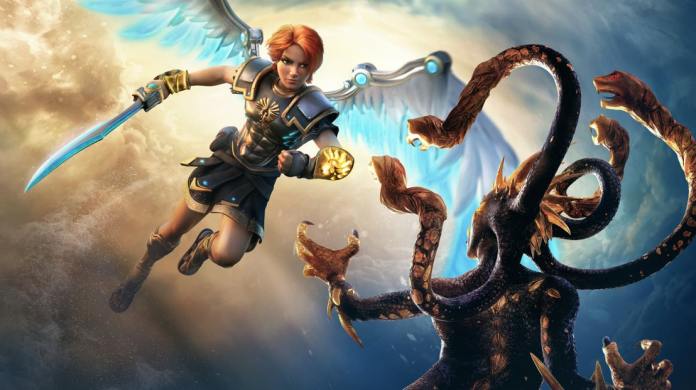 Developed by Ubisoft Quebec, creators of Assassin’s Creed Odyssey, Immortals Fenyx Rising is an exciting new brand that takes mythological adventures to new heights. Players take on the role of Fenyx, a winged demigod on a mission to save the Greek gods and their homeland from a dark curse. Players learn the legendary powers of the gods, have to overcome heroic tests and face powerful mythological beasts to ultimately face Typhon, the deadliest titan in Greek mythology.

Immortals Fenyx Rising is a humorous and witty interpretation of the open-world action-adventure genre and offers a journey full of rewards thanks to dynamic gameplay. Players can sprint through open fields, climb mountains, and glide through the air to discover all the secrets of a region inspired by the Greek gods on the golden island.

The game features action-packed gameplay, a fast air and close combat system, and stories inspired by Greek mythology. Players have to face huge creatures like the Cyclops, Minotaur and Medusa. With the help of divine abilities such as the sword of Achilles, the bow of Odysseus and the wings of the Daidalus, players can catapult themselves into the air to confront the sheer size of their opponents. In addition to the battles, players can also face various logic and strategy puzzles, ranging from individual puzzles to the vaults of Tartarus.

All pre-orderers also get the bonus mission, “When the road gets stony”. The Immortals Fenyx Rising Gold Edition includes the main game, Season Pass and additional in-game content. Future game content is included in the Season Pass and will feature completely new gods, mythology, heroes, landscapes and play styles in three DLC: A New God, Myths of the Eastern Empire and The Lost Gods. The post-launch plan also includes free in-game events, weekly vault challenges and daily quests. The Season Pass can also be purchased separately.

All versions in the Ubisoft Store at: https://store.ubi.com/de/home

Media – SRF introduces rules for gender-sensitive language – they should...