Johnny Depp (57) vs. Amber Heard (34): a war of roses that has lasted significantly longer than the marriage has ever lasted. And doesn’t pass anyone. Even the films of the two Hollywood stars feel it.

While Depp has already lost his role in the “Harry Potter” universe, the secret trial winner Amber Heard can still count on her involvement in the next “Aquaman”. If her ex-husband doesn’t get ahead of her!

Depp wanted to prevent Amber Heard from playing in “Aquaman”, he writes „Hollywood Reporter“ in a detailed report.

Heard got the role of Princess Mera for the comic book adaptation in early 2016. After the couple separated a few months later – just a year after the wedding – Depp is said to have reached out to throw Heard out of “Aquaman”.

“I wanted her to be replaced in the Warner film,” said Depp, who contacted his sister Christi Dembrowski in a letter. Dembrowski is a film producer and is said to have had a good network with Studio Warner at the time.

Dembrowski was also Depp’s personal assistant on the 2016 Warner film Fantastic Beasts. However, networks and handshakes were apparently not enough: Heard kept her role, and “Aquaman” was a billion-dollar success at the end of 2018, while the second “Beasts” film, released almost at the same time, was a flop.

Who the “Pirates of the Caribbean” star Johnny Depp had in mind as a replacement for his ex-wife is not known. However, the game is now repeating itself: tough fans of Depp are collecting votes online so that Amber Heard loses her role in “Aquaman 2”.

Depp does not give up: After his double defeat (against the newspaper “The Sun” in court and the loss of his “beasts” role) the actor lays out loud „Daily Mail“ now appeal in the libel process. From this it emerged that Depp can be called a woman beater.

Unsurprisingly, the divorce battle continues. It’s actually only a matter of time before Depp and Heard are made into a film themselves.

Sensational victory in the women: Nadal storms towards a terrific record

Four Hills Tournament in the live ticker today: The qualification in... 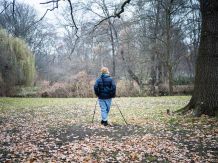 That was Berlin 2020: Corona parties and BER opening

In the new episode, Baby Yoda is upset