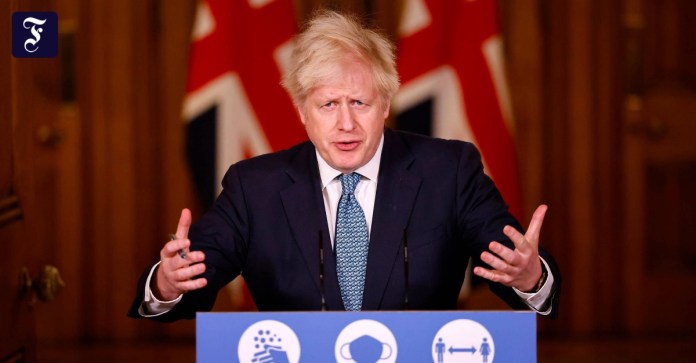 GGreat Britain is hoping for a quick reopening of the French border and the resumption of goods traffic. British Prime Minister Boris Johnson said on Monday that he had spoken to French President Emmanuel Macron. Everyone understands the position of the other. “We want to solve the problem as soon as possible.” It must be ensured that trucks can drive in both directions “covid-free”, said Johnson.

The prime minister tried to calm the population down. “The vast majority of food, medicine, and supplies are getting through as always,” said Johnson. Only 20 percent of goods would be traded through the port of Dover on the English Channel, which has been closed since Sunday evening, and only concern goods that are accompanied by people, i.e. trucks. The truck congestion has also been significantly reduced, emphasized Johnson.

France closed the borders with Great Britain on Sunday evening due to the rapid spread of a new variant of the corona virus. This also applies to the ferry connections between Dover and Calais in France and the Eurotunnel.

The government had long been preparing for such a situation, Johnson added. One is aware of the situation due to the newly emerged Covid virus strand; The risk posed by a truck driver driving alone is comparatively low, according to Johnson. According to the Prime Minister, more than 500,000 Brits have now received their first vaccination against the virus.

In the Brexit negotiations that have been going on for months, according to the British Prime Minister, no agreement is in sight. The situation is unchanged, said Johnson. However, Britain will do well without an agreement. The then applicable rules of the World Trade Organization (WTO) would be “more than satisfactory,” he said. “We’ll be fine for sure.” Almost at the same time in Paris, the government representative responsible for the EU, Clement Beaune, declared that there were still major differences on the issue of fisheries. The matter would be given a few more hours, a few days. A French government spokesman had previously stated that his country would stick to the “red lines” in the negotiations.

The UK and the EU recently demanded concessions from the other side. The kingdom officially left the EU at the end of January. The transition phase ends on December 31, during which the kingdom still has to apply EU rules. Without
Experts expect a trade agreement to include higher tariffs on many products and long waiting times at the border.

Greenhouse gas emissions are falling significantly due to Corona

Handball World Cup preliminary round – Austria retires after 29:38 against...

Frankfurt: Abuse: Judo trainer has to be behind bars for 8.5...