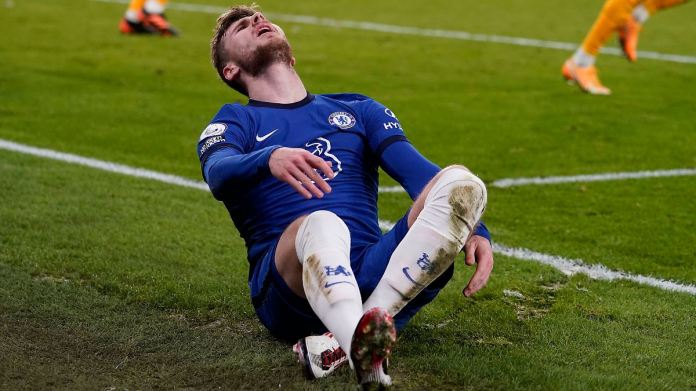 Goal doldrums: Timo Werner’s last league goal for Chelsea was from the beginning of November. After a strong start, things no longer work for the national team. His trainer Frank Lampard has a special reason to support the striker: He believes Werner is “frightening the opponents”.
National striker Timo Werner can count on the support of his team manager Frank Lampard during his goal doldrums at Chelsea. “I’m not worried,” said the coach after the 3-0 (1-0) win against West Ham United, in which Werner once again failed to score. The German’s last league goal so far was dated November 7th (4-1 against Sheffield United).

“He’s a player in a new league and we have to give him time to arrive. But he comes regularly on opportunities. He scares his opponents and creates problems for them,” said Lampard after the game on Monday. Werner moved from RB Leipzig to London for 53 million euros before the current season and has scored eight goals and six assists in 21 competitive games so far. In the Premier League he has played in all 14 games so far and scored four goals.

“Will definitely see goals from Werner”

Against West Ham Werner prepared at least the 2-0 through the double goal scorer Tammy Abraham. Lampard, meanwhile, emphasized the importance of Werner in his planning. “It’s not going so well for him right now, but the moment that changes we will definitely see goals from Timo Werner,” said the Englishman. For Leipzig, the 24-year-old attacker had scored 95 goals in 159 appearances between 2016 and 2020.

Werner recently admitted slight adjustment problems from the Bundesliga to the English Premier League. “It wasn’t what I imagined,” said the Chelsea FC professional a few days ago on Sky Sport News. “Of course I’ve already shown that I can make the difference in the league. But I also played a few games where I honestly have to say: It was nothing. The league is tougher than I thought.”

“I knew the Bundesliga very well, so I was able to take a break from a game and knew exactly when to stab again,” continued Werner. “It’s just going back and forth here, because the opponents are just brutally stable and physically fully trained.”

Parties are calling on the Federal Council to tighten the border...

Hoch Kesja pumps polar air to Germany: This is how long...

Republicans split: not with Trump and not without him?

Sales representatives are calling for stricter rules for Amazon