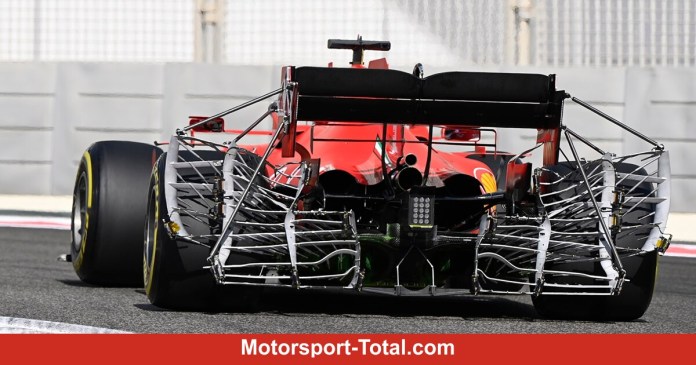 (Motorsport-Total.com) – The teams have already extensively tested parts for the Formula 1 season 2021 in public in the second half of the 2020 season. The first free practice at the 2020 Abu Dhabi Grand Prix was now the last big chance. Ferrari was particularly noticeable.

This is not the work of aliens: Ferrari debuted a revolutionary framework Zoom

The Italians came up with monumental scaffolding on the rear of the SF1000. The dimensions of this monster give us an idea of ​​the complex consequences that the changes to the regulations will have for the 2021 season.

The curved shapes of the scaffolding serve to minimize its effect on the airflow. It should only measure with its sensors and not intervene in the current.

The placement of the probes themselves could herald a new trend: unlike in the past, when the sensors were arranged in a strict grid on the more checkered scaffolding, Ferrari has attached the probes at various points on the curved scaffolding. They are now oriented more towards the direction of the air flow and should therefore provide more accurate data. 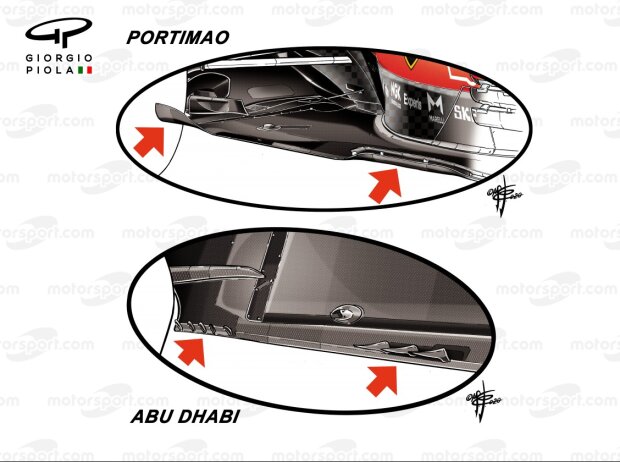 The new Ferrari underbody compared to the Portimao variant Zoom

Ferrari apparently wants to understand the structures of the air flow behind the vehicle more precisely. The “wake” that the diffuser leaves in the air spreads like a mushroom. It is precisely this form that Ferrari wants to get to the bottom of when evaluating the new parts for 2021.

These new parts are primarily a new underbody that differs from a previously tested 2021 variant. As required by the Formula 1 regulations in 2021, a diagonal piece is also cut out here.

There are now three curved fins in the middle of this section. So the designers are already in the process of preparing the airflow to meet the rear tire in the best possible way.

At the same time, the original “dog-ear” at the end of the sub-floor has disappeared. It was replaced by a number of other fins that were supposed to take over the micromanagement of the air flow even more finely.

After Renault tested various 2021 parts in Bahrain, a new underbody was also used in Abu Dhabi. However, the French were still one stage behind Ferrari. In front of the rear tire there was a “dog-ear” on the top of the underbody. 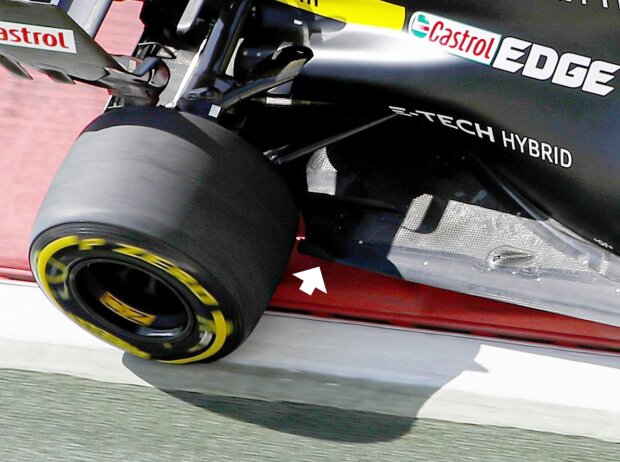 No more slippery: the Renault underbody grew a dog-ear Zoom

After the new rules have taken away a lot of space, this area will become the scene of major development battles in the 2021 Formula 1 season.

Each team will try to optimize the airflow to the rear tire. It is important to limit the negative effects that the incisions have on the flow to the diffuser.

Haas and the critical zone

Haas also jumped on the 2021 train in Abu Dhabi and equipped the VF-20 with parts for the coming season for the first time. The US team did not even bother with a “bare” baseline sub-floor, as has often been seen with the rivals.

Instead, they started with a more complex solution. When trying to improve performance, Haas invested a lot of resources in the area in front of the rear tire in the 2020 Formula 1 season. A whole series of holes, cuts, flaps and wind deflectors should manipulate the air flow so that it harmonizes perfectly with the rear tire. 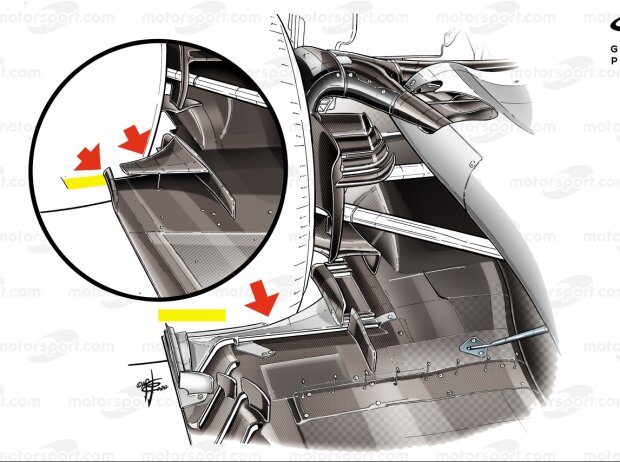 Haas came up with a rather elaborate solution Zoom

With this, the team tried to compensate for the turbulence that the tire caused and that had an impact on the airflow to the diffuser. Especially when cornering, tire deformation can cause unwanted turbulence and cost a lot of downforce.

With the 2021 sub-floor, Haas is using its knowledge in this area under the new regulations. At the end of the sub-floor there is the well-known “dog-ear”. Much more interesting, however, is a large horizontal flap above the subfloor attached to a standing plank. 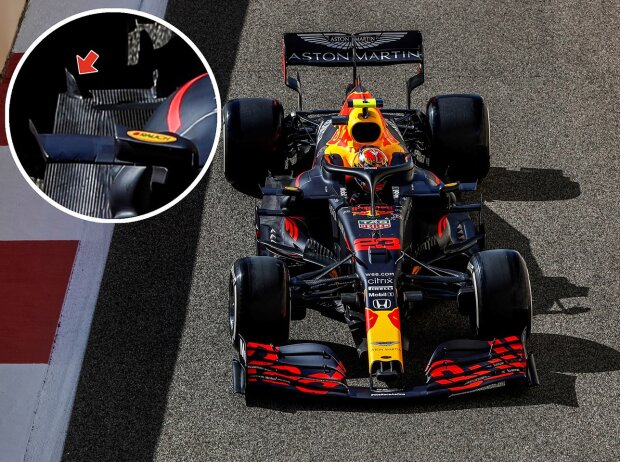 The first excesses also appeared on the Red Bull underbody in the critical zone. In this case it is a curved fin just in front of the rear tire. Compared to the other teams, it is a good distance from the end of the sub-floor.

Work also continued on the rear wing, which had already been tested in Bahrain. The wing on only one stilt returned. This time, however, it was used all weekend – and with success.

Mercedes has not publicly tested any aerodynamic components for the Formula 1 season in 2021. But that doesn’t mean that the first free practice session in Abu Dhabi wasn’t used to prepare for the 2021 season.

The W11 has already driven several times in free practice without the double-axle steering DAS. The drivers should be prepared for a life without the possibility of being able to adjust the track of the front tires while driving. 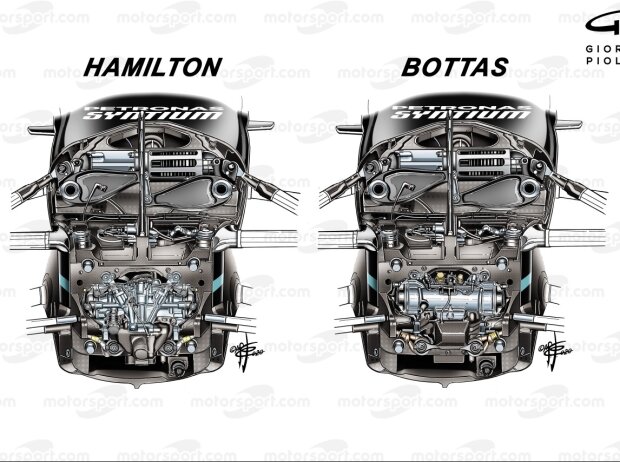 With or without THAT? The differences are huge Zoom

The system has proven to be very useful in situations where drivers needed to get temperature in the tires. That helped them especially during the SC and VSC phases, but also at the start of the race.

In the FT1 at the 2020 Abu Dhabi Grand Prix, Valtteri Bottas’ Mercedes was equipped without DAS. Lewis Hamilton, on the other hand, was given the opportunity after his forced break to familiarize himself again with the system that was used one last time in the race.

Pope calls on believers to have a simple Christmas

Top or flop? That is why certain books in Germany...

Which federal states are ahead when it comes to vaccination

Snow for a couple of hours