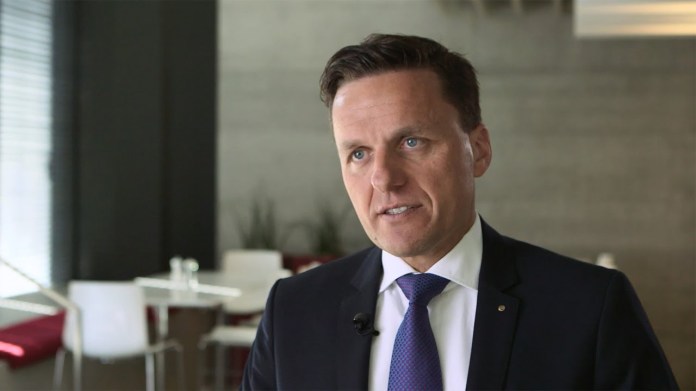 Credit Suisse has snapped up many deals in UBS’s Swiss business. But now there is a major weakness in CS’s flagship area. There is a shortage of young talent.

The finding becomes striking with today’s appointment of Andreas Gerber. Andreas Who? Many ask.

The banker has been part of CS since 1989. That’s 31 years, practically his entire professional life. Gerber was previously responsible for SMEs within CS Switzerland and there for corporate customers.

Now Gerber is rising to head the entire corporate customer business. There he takes over from Didier Denat, who as an investment banker was in the wrong place with his knowledge of the capital markets.

Denat was already on sick leave; he is reorienting himself, as the CS announced this morning.

If Denat was not in the right place, but had a capacity in his field, many wonder what qualifies Andreas Gerber for his new top job.

This is how Gerber leaves construction sites behind in its SME sector. The most important is the management of the Zurich market area. The job holder recently had to leave there, his place is still vacant.

In Zurich of all places there is now a gap. Andreas Gerber was once the responsible area manager himself. When he rose to head SME, he named the banker who is now on board as his successor.

According to an insider, this was far too late. Although it has long been clear that it was a wrong appointment, Gerber had waited with a decision.

In the eyes of such critics, Gerber is now taking a step too big with the promotion to the Swiss corporate banking business.

Others see tanners as unknown outside the industry, but all the more talented.

His great moment was the Covid rescue operation for the many Swiss SMEs in spring.

The NZZ am Sonntag dedicated a big story to Gerber after he set up the Covid 19 rescue operation on behalf of CS CEO Thomas Gottstein.

It all started on March 10th with a call from Gottstein to the then SME boss, the newspaper wrote.

“’We have to do something for Swiss SMEs,’ he says, and outlines a vague idea. Banks should easily give interest-free loans to companies in order to keep them afloat despite the lockdown. ”

Gottstein said he wanted a proposal on the table “tomorrow morning”, and then asked Gerber how he would “structure” the loans if he were “the Swiss government”.

Then the SME boss gave gas. “Gerber works through the night with his team and outlines a plan on two A4 pages that will result in 40 billion bridging loans.”

Gerber, the experienced and dynamic corporate client boss? Or a tanner who ends up in shoes that are too big?

If the latter is the case, then the problem does not lie with the winner, but with the boss. His name is André Helfenstein and he recently became famous for the closure of the Neue Aargauer Bank NAB.

Helfenstein has to keep the area of ​​Switzerland under control. This had always shone with record profits in the past.

In February, the new Switzerland boss succeeded Thomas Gottstein, who had been promoted to the top group CEO after the scandal.

Previously, Helfenstein was responsible for institutional issues within the Switzerland division.

Once the CS was considered a talent pool, today there are gaps. Where have all the youngsters of number 2 gone on the pitch?

The question is also directed to Thomas Gottstein. The current CEO led CS Switzerland from 2015 to the beginning of 2020. Part of his job was to attract good people.

Now the ceiling with powerful bankers has thinned, and Gottstein’s figureheads like Anke Bridge have shot up the career ladder, but they do not come from the business.

Transferring data to a new cell phone: Here’s how it works...

Arsenal FC close to relegation: Mikel Arteta is in the pillory