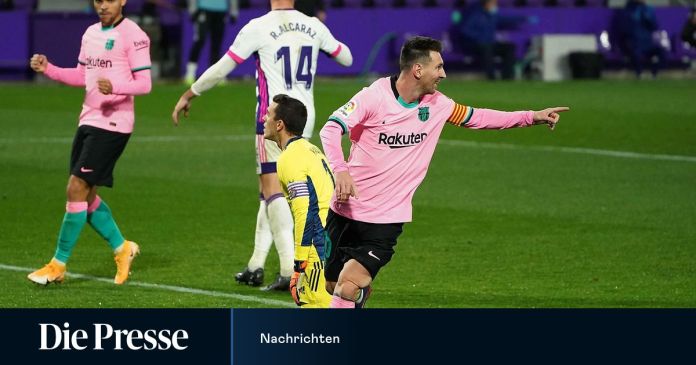 Barcelona’s superstar now holds 644 goals for a club, which not even Pele did for Santos. Spanish media headlines: “We will never see someone like him again.”

The annihilation of a goal record by football legend Pele has moved the otherwise taciturn superstar Lionel Messi to an emotional review. “When I started playing soccer, I never would have thought it possible that I would break any record. Especially not the one I set today and that Pele had so far,” wrote the 33-year-old Argentinian professional des FC Barcelona on Instagram.

In the 3-0 victory of the Catalans at Real Valladolid on Tuesday evening, Messi set the all-time high in the 65th minute: After Pedri made a beautiful pass from his feet, Messi scored his 644th goal for Barca. Never before had a professional hit the net so often for a single club. The now 80-year-old Brazilian Pele once scored 643 goals for FC Santos.

The newspaper “Mundo Deportivo” printed the number 644 in capital letters on page one on Wednesday and wrote under it: “Legend Messi”. “We will never see someone like him again,” commented the Spanish league. Before getting on a private plane to celebrate Christmas in Argentina, Messi thanked fellow players, family, friends and “everyone who supports me every day”.

Will the VW Group go public with the Porsche brand? ...

Update timetable for 2021 and “attackers from alien worlds”

Beginning of the mass tests: “A little pique”

Chancellor Angela Merkel does not want to ask the question of...