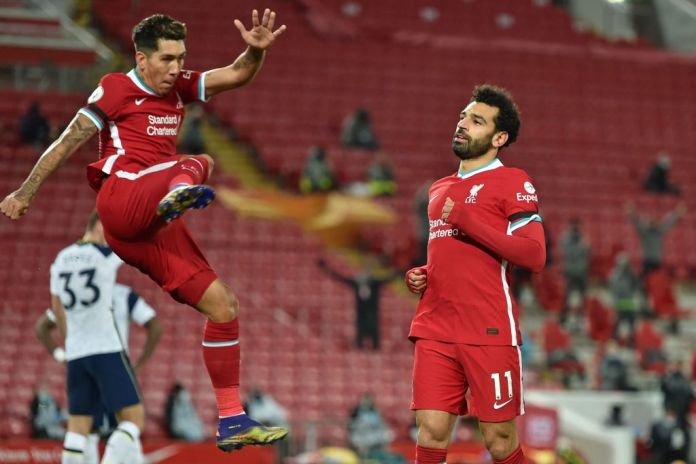 What a game! The Reds showed the previous leaders Tottenham in Anfield the limits and were finally able to win with a late goal from Firmino. For a long time it looked as if Mourinho’s parked bus could kidnap a point from Anfield, but in the end the Reds deservedly won and took the championship lead!

Klopp basically trusted the team from the Fulham game, only Joel Matip had to pass due to a back injury. This made Rhys Williams his Premier League debut in this top game!

Strong first half of the Reds

Before the start of the game, Anfield remembered the late Gérard Houllier with a minute of applause after the legendary Liverpool coach sadly passed away during the week at the age of 73. You could see that the Reds wanted to win this top game for the late triple winner!

Accordingly, Liverpool started the game brilliantly and wanted to make up for the point loss from the weekend in Fulham. As expected, Tottenham was very low and waited for the infamous counterattack. Liverpool created some good chances, but failed for the time being to world champion Hugo Lloris in the guests’ goal.

In the 26th minute, however, Salah gave him the well-deserved lead when, after some good work by youngster Curtis Jones, he sank his shot by detouring Alderweireld’s calf in the far corner. 11th goal of the season and 1-0 for Liverpool!

Unfortunately, the joy did not last long, in minute 33 Tottenham then set the first counterattack, Son did not miss this chance to score his 11th goal of the season and made it 1-1. As so often this season, the VAR investigation in this narrow offside decision to the detriment of Liverpool and the goal counted. One had the feeling that supposed offside positions were already being examined more closely …

In the half-time break, Klopp changed something and Liverpool looked more cautious. They still had a lot of possession, but they didn’t attack as aggressively, which helped Tottenham find their way into the game. Immediately after the restart, Tottenham had the first good chance through Bergwijn, but Alisson missed it.

In the 63rd minute, Spurs had the greatest chances of the second half: Bergwijn first put a shot on the bar, Fabinho was able to clear the rebound to a corner. At this corner Kane came to the header quite free, but thankfully managed to somehow put the ball over the goal with a rider. Lucky!

After that, both sides were supposedly satisfied with the draw, and the Spurs in particular hid themselves in the familiar manner. Liverpool found no means for the time being, Sadio Mané had the best chance after a nice pass from the outstanding Curtis Jones. Unfortunately, the ball only hit the crossbar.

In minute 92 Sadio Mané fought for a corner in his private duel with Aurier. Andy Robertson brought one of his famous crosses perfectly towards the penalty spot and Bobby Firmino was there! 2: 1 for Liverpool, Bobby stormed to the head and celebrated frenetically with the 2000 fans. What a picture, you could literally feel how important this goal was to him!

In the last two minutes nothing happened, which meant that Liverpool remained undefeated in the 66th league home game in a row and further expanded the club record. In addition, the Reds now say hello from their usual place in the table, the top of the table!

Hundreds of Britons disappear from Swiss quarantine at night – BZ... Parliament – Stuttgart – state politicians shocked after storming the US...

Photokina is history – at least for now