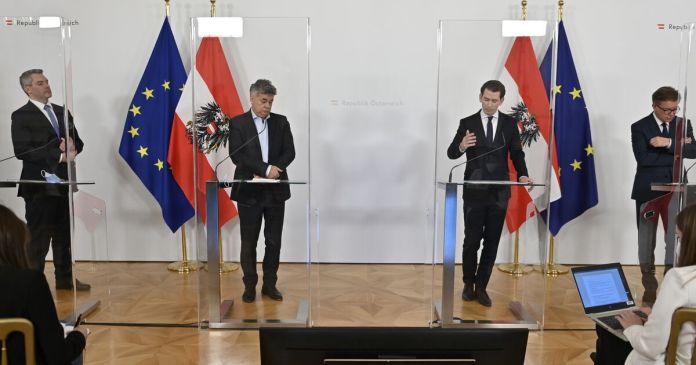 As the APA learned from negotiating circles, the country is to be shut down completely after the Christmas holidays by January 18th. It is becoming apparent that the trade will have to close again, the gastro will remain closed. On the weekend of January 16 and 17, there will be mass tests – those who cannot be tested have to stay at home in quarantine for another week.

In view of the persistently high level of new infections, the government turned back on Friday and announced a new lockdown after Christmas. The trade will be closed until January 18th, restaurants and hotels will remain closed. And even longer – namely until January 24th – the lockdown is to apply to everyone who does not take part in the second round of the mass tests in mid-January, the government announced after a meeting with the state governors.

Participation in mass tests is only partially voluntary

Participation in the mass tests planned for January 15-17 will no longer be de facto voluntary. Because the facilities that will be reopened on January 18th – from retail to culture to gastronomy – may only be used by those who can show a negative test. And the all-day exit restrictions, which will apply again on December 26th, will only be relaxed from January 18th for those people who can show a negative test.

“This is the only way to reopen tourism, culture and gastronomy in times of the pandemic and at the same time prevent the numbers from exploding again,” said Chancellor Sebastian Kurz (ÖVP) in a press conference. He stressed that Christmas will be spent “as planned”, but that measures will be tightened afterwards to achieve a seven-day incidence below 100.

The government had previously discussed how to proceed with the state governors. The ÖVP and the Greens relaxed the second “hard lockdown” on December 7th – after only three weeks and despite the high number of infections. The measures that have been in force since then – schools and retail were allowed to reopen, only restaurants and hotels remained closed – have not been sufficient to slow down the infections in the long term: Most recently, there were around 2,600 new infections and almost 120 deaths every day.

With an FFP2 mask on the mountain

The mountain climbing aids, i.e. cable cars and lifts, can – contrary to recent fears of tourism professionals – unlock from Christmas. The decision rests with the federal states, which receive minimum requirements for opening from the federal government, while the state is otherwise put into a new lockdown. Cross-country skiing trails also remain open and ice skating is allowed.

Federal guidelines for unlocking gondolas and the like are distance rules when queuing and for transport within the gondolas. In addition, FFP2 masks are compulsory for skiers and snowboarders at the lifts. The federal states can make more detailed provisions, said Kogler. “The situation is not exactly the same everywhere,” said Vice Chancellor Werner Kogler (Greens) on Friday evening. On the basis of the plans discussed with the provincial governors, the promotion aid can in any case open, said the politician.

DPD Austria has a record year: more than 57 million parcels...

Surprising job cuts in the US labor market | SN.at