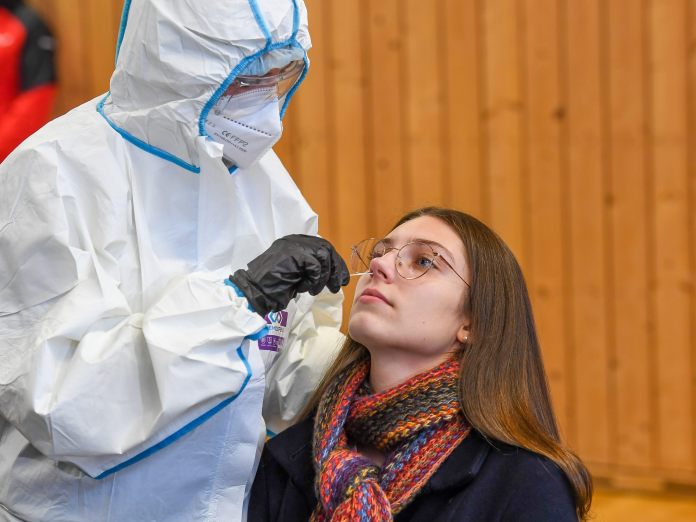 
It starts today, Friday.
© WHAT

The mass tests in Vienna, Vorarlberg and Tyrol start on Friday. In Vienna, tests are carried out daily from 8 a.m. to 6 p.m. at three locations.

In the federal states of Vorarlberg and Tyrol as well as the federal capital Vienna, the nationwide, Austria-wide corona mass tests will start today, Friday. In Vorarlberg and Tyrol they last up to and including Sunday, Vienna tests until December 13th. There are three locations available for the Viennese. Operation takes place daily from 8 a.m. to 6 p.m.

In Vorarlberg, corona tests are carried out in 80 test stations from 7:00 a.m. to 5:00 p.m., in Tyrol 297 test locations were planned – also mostly during the same period. On Friday, 130 of them will be opened for the time being, the country said. The other federal states will then carry out the mass tests next weekend, with Burgenland starting first on Thursday, December 10th.

Antigen tests are primarily used in Austria-wide mass tests. These are one possibility of a direct pathogen detection of SARS-CoV-2. “In the case of antigen tests, no laboratory is required for evaluation, the result is available within a short time (about 20 minutes),” informed the Ministry of Social Affairs. However, they are less reliable than PCR tests.

Samples are taken by means of a nasopharynx swab or, in some tests, a throat swab. Therefore, these tests should only be performed by a healthcare professional. A positive test result triggers the official reporting requirement.

Differences to the PCR test

In contrast to PCR tests, antigen tests do not detect the genome of the virus, but rather its protein or protein envelope. According to experts, they are particularly suitable for identifying people who have a relatively high SARS-CoV-2 viral load at the time of the test. Above all, this can be used to remove people from the infection process who experience little or no symptoms, but can infect others.

It is clear that these methods are less precise than the gold standard PCR tests. This means that they do not recognize the virus carrier in whom the infection is only just beginning to develop and in whom the viral load in the nose and throat is still correspondingly low. The same applies to the sometimes long period in which the infection subsides, but SARS-CoV-2 viruses are still present to a lesser extent than in the infectious phase. This is where PCR tests work more reliably.

The large-scale corona mass tests are not only a challenge in terms of personnel and time. In the federal states, it must also be clarified how any accidents during these tests and the resulting liability issues are dealt with. Upper Austria and Tyrol, for example, are taking on liability and accident insurance, other countries are still checking.

In Upper Austria, the state will take over liability and accident insurance for all volunteers who want to work in the mass tests from December 11th to 14th, said Governor Thomas Stelzer’s office (ÖVP). The voluntary medical and non-medical staff is insured accordingly through the Austria team.

During the “Lower Austria tests” campaign, all volunteers in the state are insured. The community federations have concluded a corresponding agreement. The APA was informed on request that the insurance covers, among other things, accidents while performing voluntary assistance.

Tyrol have taken out liability and accident insurance

The “Tiroler Tageszeitung” reported that the question of liability had recently employed volunteers as well as the union and mayor during the tests. Tyrol has now taken out liability and accident insurance. If something should happen, according to the crisis team, claims will be handled across the country.

For Styria, Harald Eitner, head of the specialist department for disaster control and national defense, said that it can be assumed that all testers are acting on behalf of the health authorities and that there is corresponding coverage.

In Carinthia, offers are currently being obtained for insurance for the volunteers, according to the state press service. This should also go in the direction of accident and liability insurance.

Whether the state of Salzburg takes out liability and accident insurance for mass testing is currently being examined, the state spokesman said. Burgenland is also still considering: The question of liability in the event of injuries, accidents and the like is still open. In this regard, they are still in coordination, it said.

Augsburg: 28-year-old dies after an argument at a bus stop, couple...

Sick leave in times of pandemic

Saxony’s Prime Minister Kretschmer (CDU): The attempt to loosen it has...