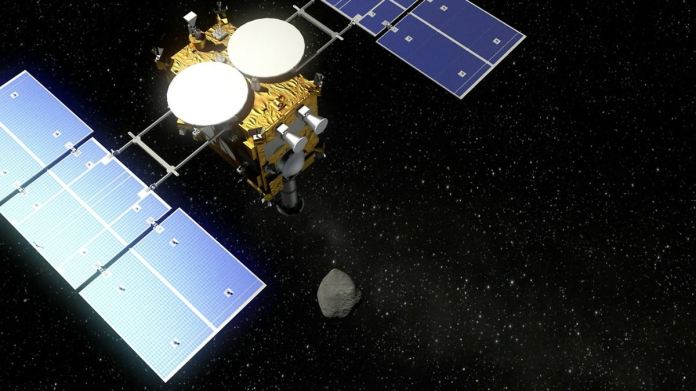 A great moment is approaching for astronomers and space fans: After traveling for years through space and covering billions of kilometers, the Japanese space probe “Hayabusa 2” is returning to earth. She brings extraterrestrial rocks from an asteroid.
After a space travel of more than five billion kilometers, the Japanese space probe “Hayabusa 2” is about to complete its spectacular mission. Six years after her departure from Japan to the asteroid Ryugu, she will return on Saturday evening (CET) and will drop a capsule with samples of the celestial body while flying past Earth over a desert in South Australia.

It is 4.6 billion years old material from the earliest times of the solar system, as the mission manager, Makoto Yoshikawa of the Japanese space agency Jaxa, explained. After that, “Hayabusa 2” will set off on another mission and head for another near-Earth asteroid. The probe should arrive there in around 10 years.

A previous model of “Hayabusa 2” brought soil samples from an asteroid to Earth for the first time in 2010. There have been other flights to asteroids – but no other probe has so far brought material back to Earth. With the mission, in which the German Aerospace Center (DLR) participated with the “Mascot” lander developed together with the French space agency CNES, the scientists want to trace the origins of the solar system. “This is a historic moment for space research,” said Anke Kaysser-Pyzalla, CEO of DLR.

Material also from below the asteroid surface

The probe had collected samples from the surface of Ryugu and, for the first time, from an area below the surface of an asteroid. As soon as the sample capsule has been separated from the probe and enters the earth’s atmosphere, it is slowed down by the atmosphere when it is very hot. A parachute is deployed around ten kilometers over Australia on Saturday at around 6.30 p.m. (CET).

A short time later, the capsule will touch down at the Woomera test site for aerospace in southern Australia. Then she is brought to Japan. The first analyzes of the material will begin in Japan next June. Japan’s Jaxa space agency will make some of the samples available to NASA and, in 2022, to researchers in other countries. The DLR is also planning investigations.

Patricia Kelly had to go to the emergency room because of...

Biontech founder in conversation with Merkel and Spahn: Working for the...

Stiko boss Mertens: Countries do not adhere to the vaccination sequence

Beatrice Egli inspires fans in the snow angel look: “Like a...