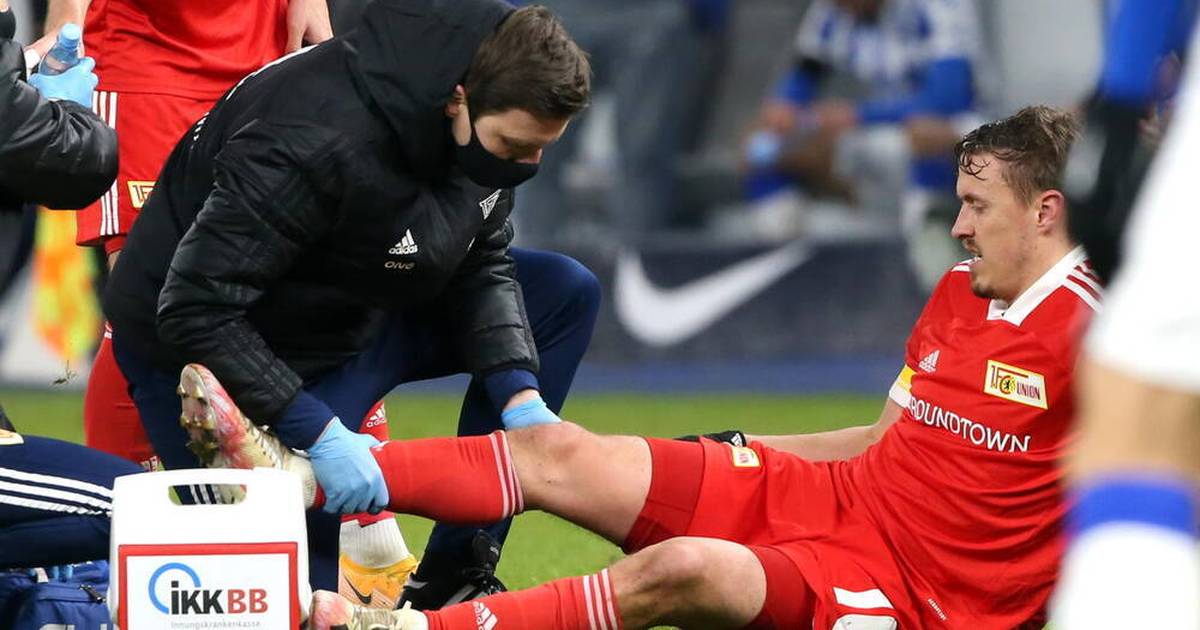 Without opposing influence, Max Kruse from Union Berlin sustained a muscle injury in stoppage time in the duel against Hertha BSC. “The examinations on Saturday at the Charité in Berlin revealed a muscle injury on the right rear thigh,” explained Union: “Kruse will therefore not be available to coach Urs Fischer until further notice.”

The CHECK24 one-two with Jens Lehmann on Sunday from 11 a.m. on TV on SPORT1

So it was a derby to forget for the striker. After the early red card against Robert Andrich in the 20th minute, Kruse was hanging in the air, could hardly set any accents at 1: 3 (1: 0) and had to plow a lot in the minority. A shot on goal was not successful for the number ten until the injury (the game for reading in TICKER).

Union is now worried. “He’s the liaison player that we’ve been missing. The one who is always there for the creative and the extraordinary,” said coach Urs Fischer after the diagnosis.

Is there a crash landing for the club without its star after the soaring flight?

In the coming weeks it will at least be against Bayern, Stuttgart and Dortmund.

Without question, Kruse has been the outstanding figure at Union so far this season. Thanks to him, the team is still number one in the capital despite the defeat in the prestige duel (The Bundesliga table).

Union has landed a coup with the engagement of the attacker.

Only Lewandowski and Haaland are more dangerous

There are a total of eleven goals for Kruse in the league (six hits and five assists). Only the superstars Robert Lewandowski (17) and Erling Haaland (12) were in the ranking before the matchday in front of the 32-year-old.

Kruse was in top form and has already set two records this season. He scored four games in a row – a Köpenicker never managed that in the Bundesliga. The striker also converted his 16th penalty in a row against Bielefeld, setting Hans-Joachim Abel’s record.

The calls for the star to return to the national team became louder again. SPORT1 columnist Tobias Holtkamp is also calling for a comeback.

During the week, Kruse’s coach Fischer said: “If that were the case, I would be happy.”

With the statistics of the offensive man, there would be no discussion of a DFB nomination for many other players. Because the left foot has the numbers of a top star in his career.

The difference to the top stars: Kruse never played for a top club, but instead lifted his teams from midfield to the top of the table – like Union (Bundesliga game plan).

One of the strongest Germans changed the previously very combat-oriented and uncreative game of the capital club massively.

Last season Union was one of the teams with the most long steep passes and the second weakest pass rate. Sebastian Andersson was often sought after with high alludes and no team scored as few goals from the game as Union.

Now the Fischer-Elf appears completely different. Kruse is the playmaker’s fixed point, takes part in the build-up of the game, distributes the balls, determines the rhythm and is still present in the penalty area. In addition, Kruse is there in difficult situations and moves forward.

“Especially when it comes to possession, we have improved and have more confidence in ourselves,” said Fischer about the change DAZN before the derby.

Köpenick’s club legend Thorsten Mattuschka said that SPORT1: “The face of this success is not Max Kruse, because he does not win the games alone.”

But Kruse is a very important conductor of the soaring. Without him, Union threatens to crash-land.

Leicester moves up to second place

Zakaria scorer at 2: 2 – Gladbach gives the victory out of hand against Stuttgart – sport

Leicester after 2-0 against Southampton League second

Chelsea FC takes the first step out of the crisis

Mvumbi: This colossus hits the goal with every throw at the Handball World Cup

New discovery could be important

Reactions to riots by Trump supporters

Corona vaccine Moderna before approval in the EU

The Dell Precision 3560 gets a fresh design, Intel Tiger Lake...