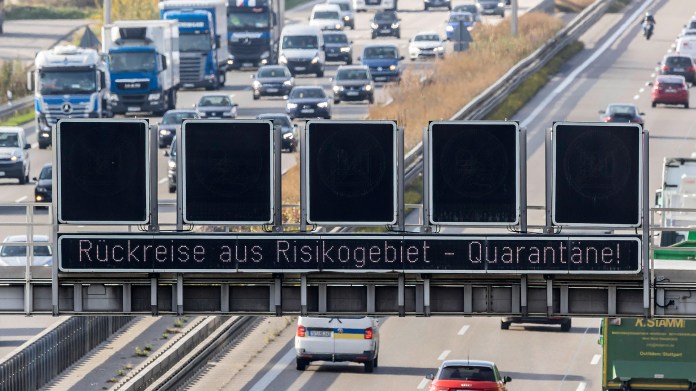 Mecklenburg-Western Pomerania sends returnees from German corona high-risk areas into quarantine. The decision of the state government causes criticism and controversy within the coalition.

High-risk areas are regions with an incidence value of over 200. Mecklenburgers and Western Pomerania who come back from such a corona hotspot have to be in quarantine for ten days. This can be shortened by two negative corona tests within five days. Only those who actually visit their nuclear family do not have to be quarantined after the Christmas holidays. Returnees from risk areas abroad must continue to be isolated at home in any case. After a special meeting of the state government on Friday, Mecklenburg-Western Pomerania’s Prime Minister Manuela Schwesig (SPD) announced increased controls at the state borders.

Criticism from the ranks of the CDU

Schwesig said mobility in particular is a driver of the pandemic. She urgently appealed to the citizens to avoid meetings within the family as much as possible. Four state parliament members from the ranks of the co-ruling CDU criticized the new regulation as “a disproportionate interference with the fundamental right to freedom of movement”. It amounts to a travel ban and above all meets people without family who want to visit friends on the holidays. “30 years after German reunification, this is a devastating signal,” said MEPs Sebastian Ehlers, Matthias Manthei, Daniel Peters and Marc Reinhardt.

When asked, Schwesig stated that the new corona regulation had been “jointly” decided in the SPD / CDU cabinet. Criticism of the project came in advance from the country’s ombudsman, Matthias Crone. He considers a new special route in Mecklenburg-Western Pomerania to be legally very difficult. The opposition Left Party also criticized Schwesig’s regulation. It is incomprehensible that Schwesig still differentiates between high-risk areas in other federal states and their own state in their considerations, said the parliamentary group leader Simone Oldenburg. Mecklenburg-Western Pomerania has long since lost the status of lower new infection rates. It cannot therefore be measured with double standards. Nationwide, the incidence value for Mecklenburg-Western Pomerania on Friday was 97.4 new infections per 100,000 inhabitants in the past seven days.

This article was printed out at the address:
www.tagesschau.dehttps: //www.ndr.de/nachrichten/mecklenburg-vorpommern/Quarantaene-fuer-Reiserueckkehrer-Regelung-erntet-Kritik,coronavirus3898.html

Germany: child labor? Judgment in the case of Angelo Kelly...