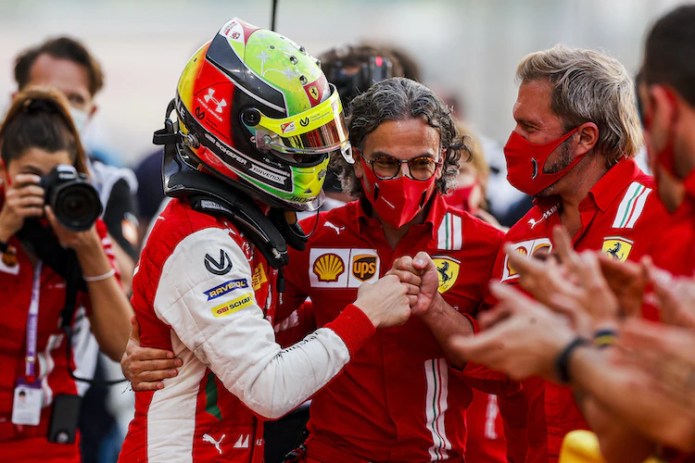 Ferrari sports director Laurent Mekies, who is also responsible for the Scuderia’s youth program, says about Formula 2 champion Mick Schumacher: “He demonstrated his ability to make the best of every situation.”

Those responsible for the Ferrari junior program can be proud, for the second time a member of the Ferrari Driver Academy (FDA for short) has won the title in Formula 2, which, as the highest formula racing class, is often referred to as the antechamber of Formula 1. Mick Schumacher has repeated what a certain Charles Leclerc has already achieved in the 2017 season.

Mick had to wait for the decision until the last race, as eighteenth he did not get any fresh points in the Sakhir sprinters, but his opponent and FDA team-mate Callum Ilott did not make it into the points either, which means he is 14 points ahead, with which he had risen to the last test of strength, until the end of the season did not get smaller. Ilott had to put up with second place in the table, and with Robert Shwartzman, fourth overall, another Ferrari junior landed in the top four of the final score.

“That was a great season for the Ferrari Juniors in Formula 2”, praised Laurent Mekies. The sports director of the Scuderia from Maranello, who is responsible for the youth program, praised the champion: “Mick made progress over the course of the year, showed remarkable consistency and demonstrated the ability to make the best of every situation.”

There are also nice words from the French for Ilott and Armstrong: «Mick made progress over the course of the year, showed remarkable consistency and demonstrated the ability to make the best of every situation. Callum was a more than worthy opponent until the end. He was fantastic in qualifying and with five pole positions he was better than any other driver. And he was also very quick in the races. “

“It was great to see how he and Mick fought each other wheel to wheel in the beginning of the last race. They didn’t hold back, but everything went perfectly well. Robert finished fourth in the final, and in his rookie season he won four races more than any other driver, ”Mekies emphasized.

“The FDA’s support program continues to bear fruit for the young Ferrari drivers. Proof of this is the fact that Schumacher, Ilott and Shwartzman will take part in the junior tests in Abu Dhabi on December 15th. Mick has already secured a Formula 1 cockpit and we can’t wait to see him on Haas’ F1 team next year. As for the other two, we believe that it is only a matter of time before they make the leap too, ”the 43-year-old engineer stated.

The dream ship: shooting problems for the new episodes with Florian...

Sam Sunderland (KTM) did what had to be done / Dakar...

He defeated Philipp Hildebrand – Mathias Cormann’s election as head of...