The Biontech vaccine “Made in Germany” is already being administered in Great Britain and the USA. Canada, Bahrain, Saudi Arabia, Mexico and now Kuwait have also granted the vaccine emergency approval. But citizens in Germany still have to wait for approval from the European Medicines Agency (EMA).

Federal Minister of Health Jens Spahn (CDU) demanded in the Corona summit switch that EMA approval should take place as soon as possible. Now he put pressure on the European authority again on Twitter. “The data should be checked and the EMA approved as soon as possible,” he wrote in one of three tweets.

And further: “It is also about the trust of the citizens in the ability of the European Union to act. The federal and state governments are from December 15. Ready for use in the field: The first vaccination doses are virtually ready and can be vaccinated immediately after approval. ”

In plain language: Germany can start now – only the EU is dawdling.

In a third tweet, Spahn makes an urgent appeal: “Every day that we can start vaccinating earlier reduces suffering and protects the particularly vulnerable.”

Because: Germany would also have been significantly faster in a single, national approval process, said Spahn. BILD found out about this from participants in the Corona conference.

So the Germans need patience

According to information from BILD, the vaccination process in Germany will also be delayed because the manufacturers are not progressing as quickly as planned. At the moment it is not unproblematic to get vaccination doses, said Federal Health Minister Jens Spahn (40, CDU) during the conference call with the Chancellor and the country leaders.

Specifically: Spahn expects only 3 to 4 million vaccine doses by the end of January, partly because it takes longer to produce at Biontech / Pfizer.

Obama, Bush and Clinton want to get vaccinated on TV

Questions and answers about the new vaccination regulations

Coronavirus: Banks are to extend Covid loans to a flat rate... 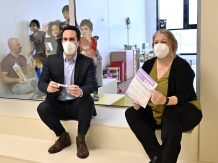 Corona self-tests at Vienna kindergartens so far all negative – Coronavirus...