Dell is now using the new 10-nanometer processors from Intel from the Tiger Lake family in the current generation of the 13.4-inch XPS 13 notebook. We looked at the 9310 model with a Core i7-1165G7 in a hands-on test.

Companies on the topic

The XPS 13 9310 in our hands-on test is in principle “only” a processor upgrade of the XPX 13 with the model number 9300 presented at the beginning of the year. However, one that has it all. Compared to the Ice Lake CPU used there, Tiger Lake, the 11th generation of Intel’s core processors, has increased its computing power and, above all, its graphics performance.

A Core i7-1165G7 is built into the test device. The quad-core processor with hyperthreading works with a clock frequency of up to 4.7 GHz with a brief turbo boost. The processor is supported by 16 GB of non-expandable RAM, consisting of fast LPDDR4x chips with 4,267 MHz. In terms of pure computing power, the XPS 13 with Tiger Lake cannot hold a candle to devices with Ryzen 4000 hexacore or even octacore CPUs. The Dell achieved 8.84 points in multi-CPU rendering in Cinebench R11.5, while the Acer Swift 3 with an AMD Ryzen 4500U achieved 9.62 points in our last test. In return, the XPS 13 achieves a slightly higher value than the AMD notebook with 4,666 points in the PCMark 10 application benchmark, which is more relevant for everyday use, with 4,869 points.

The higher performance is largely due to the Iris-Xe graphics unit integrated in the processor. With 15,989 points in the 3DMark Night Raid run, it is not only more than three times as fast as the Intel UHD graphics in an Intel Core i5-102010U from the Comet Lake generation, but also outperforms the integrated Radeon GPU clearly in an AMD Ryzen 4500U. We measured almost 10,500 meters for them. Overall, the 3D performance of the Xe graphics is roughly on par with an Nvidia Geforce MX350. The 512 GB Kioxa SSD of the type XG6 used in the XPS 13 was also fast with 2250 MB / s in sequential reading. The battery life is satisfactory with just over four hours under load and with a high display brightness. About seven to eight hours should be possible in everyday life. The device thus meets the requirements of Intel’s Evo certification. The quick charge function for the 52 Wh battery still has to be activated in the Dell Power Manager application. Adaptive charging is set as standard.

The CPU and the other components are packed in a slim and very compact aluminum housing. With a weight of 1.2 kg it is a little heavier than expected, but it is also very solid and torsion-resistant. A matte 13.4-inch IPS panel without a touch function sits in the test device. At 1,920 x 1,200 pixels, the vertical resolution is slightly higher than with the usual Full HD displays. The panel also pleases with its brilliant colors and high brightness of 500 nits, which makes working outdoors easier. According to the manufacturer, it also has a blue light filter that does not affect the color display. The panel is set in an extremely narrow frame all around. The HD webcam with an additional IR module for Windows Hello has still found space above the panel. The manufacturer uses a very compact camera module, which, however, does not provide a particularly good picture.

USB-C only – but with Thunderbolt 4

Due to the flat design, there are only a few external interfaces: two Thunderbolt 4 ports, an audio jack and a MicroSD slot. One of the Thunderbolt ports in USB-C format also serves as a charging socket for the tiny power supply unit. The Thunderbolt 4 ports can not only transfer data to other Thunderbolt devices with up to 40 Gbps, they also support USB 4 with up to 20 Gbps, allow the connection of two 4K displays in series and the connection of external graphics cards via four PCIe 3.0 lanes. In addition, unlike Thunderbolt 3, they should be protected against physical DMA attacks. To connect conventional USB devices, the XPS 13 comes with an adapter from USB-C to USB Type-A. A Killer AX1650 WLAN module that supports WiFi 6 and Bluetooth 5.1 is installed as a wireless interface. Dell does not offer an LTE or even 5G option.

Despite the compact design, the XPS 13 has a keyboard with normal sized keys that almost completely fills the width of the chassis. Only the cursor keys for up and down are very small and also have to be used for scrolling as soon as the FN key is pressed at the same time. The power button with integrated fingerprint reader is located in the upper right corner of the keypad. A relatively large touchpad with a glass surface and gesture recognition sits under the two-level illuminated keyboard. The palm rest of the notebook is made of coated carbon fiber fabric.

Supplementary to the topic

Once upon a time, the marketing strategists at Intel created the Centrino platform and logo to promote sales of the Ultrabooks. With the Evo certificate, Intel is copying this recipe for the current Tiger Lake devices. In order to be able to adorn yourself with the logo, however, the use of the processor and an Intel WiFi-6 solution is not sufficient; the mobile computers must meet certain requirements in terms of performance, responsiveness and battery life.

With a price of around 1,700 euros, the compact XPS 13 is one of the high-priced thin-and-light notebooks. It is around 200 euros more expensive than its direct predecessor, the 9300 with Ice Lake processor. The XPS 13 9310 is definitely worth the extra price. Because the Tiger Lake CPU in the 9310 model not only delivers higher application performance, but above all a significantly higher 3D performance on the level of the separate MX350 graphics chip from Nvidia.

Other pluses are the bright and matt 16:10 display, the solid aluminum housing and the high-quality keyboard. We didn’t like the economical connectivity and battery life.

WAC celebrates success over Feyenoord and achieves promotion to the knockout...

Mats Hummels talks about the dismissal of Lucien Favre 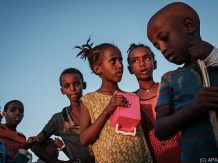 Ethiopian government wants to give aid workers access to Tigray –...

“In America Julian would be buried alive”

Set up Docker on the Raspberry Pi

The key interest rate in the euro area remains at a...