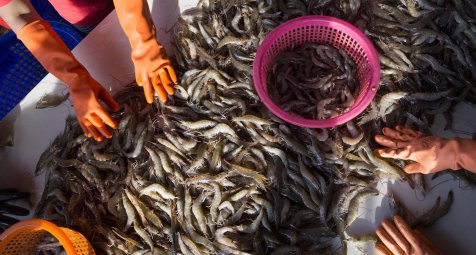 Bangkok – In Thailand, more than 1,000 cases of infection are now linked to a corona outbreak in the country’s largest seafood market. Of the meanwhile 6,156 corona tests, 1,063 were positive, the health authorities announced yesterday.

Most of those infected are migrant workers from Myanmar who work in the Mahachai market in Samut Sakhon Province, southwest of Bangkok, and in the Thai fishing industry.

Thailand’s Prime Minister Prayut Chan-o-Cha said in a televised address that the major corona outbreak was “primarily” due to illegal immigrants. You would have made Thailand a lot of “grief” with it. Anyone who brings illegal immigrants into the country must be held accountable “without indulgence”.

First, last Thursday, a 67-year-old shrimp seller tested positive for the SARS-CoV-2 coronavirus. The market was closed last Saturday and a strict curfew and lockdown were imposed on the entire area until the end of January. Health officials announced they would test more than 10,000 people for the coronavirus.

Thailand had come through the corona crisis comparatively well so far. Before the outbreak on the market, only a good 4,000 infections had been registered nationwide. Yesterday the number of infections was 5,716. Around 1,000 new infections are recorded every day in neighboring Myanmar. © afp / aerzteblatt.de