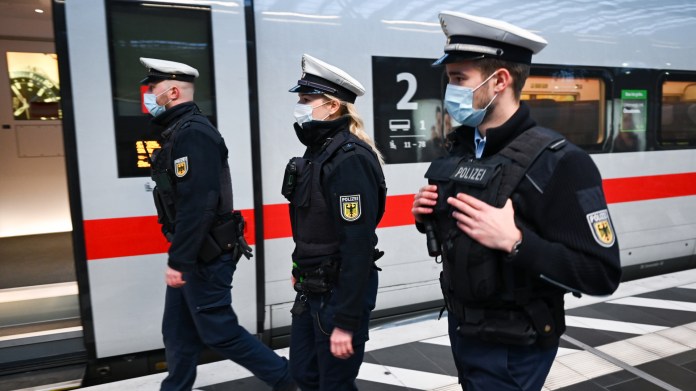 More Christmas traffic, more controls: the Federal Government and Deutsche Bahn want to set an example today with a day of action. Police and security forces should enforce the mask requirement on trains and buses.

The Deutsche Bahn has increased the control of the mask requirement on its long-distance trains. In December, security teams made up of railway employees and federal police officers were on board in up to 50 percent of these trains to warn passengers to comply with the mask requirement, the railway said. This would double the checks in long-distance traffic. The daily checks on the regional trains and at the stations would continue unchanged.

“Violations are the absolute exception”

At the Berlin Central Station, Transport Minister Andreas Scheuer (CSU), Rail Passenger Transport Director Berthold Huber and Federal Police President Dieter Romann presented an ICE, which is covered with a mask on each end car. In the coming weeks he should “travel as a rolling ambassador for the mask requirement and safe travel by train” on various routes, the group announced.

Huber emphasized that the “vast majority” of customers “literally wore the mask to protect all travelers from the start”. Violations are the “absolute exception”. At Christmas he announced a further intensification of the controls. Deutsche Bahn is expecting significantly more passengers over Christmas and announced last week that it would be using special trains from December 18 to 27, thus offering 13,000 more seats in long-distance transport every day.

According to company spokesman Achim Stauß, Deutsche Bahn is not assuming the big Christmas business of the past few years: “Nevertheless, we already have a lot of advance bookings for Christmas.” The group will again significantly strengthen the train offer. “Even if fewer people will be on the road, we would like to offer significantly more seats than in previous years in order to allow as much distance as possible,” he said.

The train does not expect overcrowded trains. However, the group cannot guarantee this, neither on the day of the action nor before and on the holidays. Because without a reservation requirement, it is always uncertain how many people are traveling by train.

Praise from the Greens – criticism from the FDP

Today’s day of action is not just about controls, but also about clarification, says the railways and Transport Minister Scheuer. Federal police officers and railway security forces should seek a conversation with the passengers.

“It is absolutely right to make people on buses and trains aware of the mask requirement,” said Oliver Krischer, traffic politician for the Greens. It is regrettable that there are still passengers who do not adhere to this requirement. “Masks are useful and ensure safety, which is why we are exceptionally supporting the transport minister in this action,” said Krischer, justifying the Greens’ approval.

The FDP is less good at speaking about the day of action. Railway expert Christian Jung considers it superfluous. “People are exemplary in wearing masks on buses and trains,” he said. “In the last few weeks I haven’t seen anyone who hasn’t been wearing a mask.” That’s why you don’t need such days of action and certainly not with Scheuer.

The transport minister had also called on the federal states in advance to carry out more checks on buses, underground trains and trams from today. Scheuer said that the mask requirement is the most effective means against Corona in public transport. In times of the pandemic, the companies still run away from passengers.

Where to get tested for Corona at Christmas in Rhineland-Palatinate –...