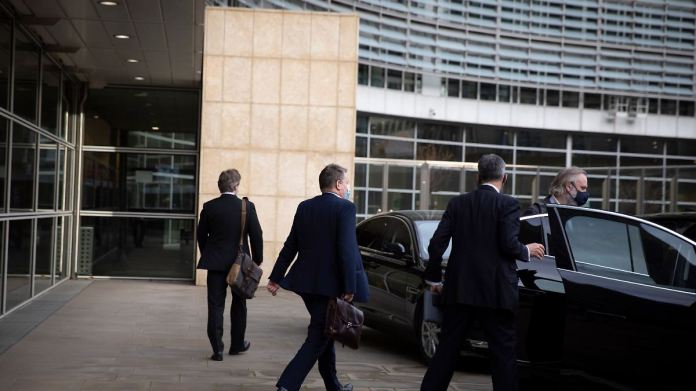 The post-Brexit negotiations between London and Brussels should actually have already been achieved. But again a deadline is exceeded – because an agreement is not yet in sight. The talks will in all probability continue anyway. But important points of contention remain.
The deadlocked negotiations between Great Britain and the EU on a post-Brexit deal should continue on Monday despite a further deadline. British government circles said that the negotiations were still “difficult” and that there were still “considerable disagreements”. “We will continue to explore all possible ways to an agreement,” added the British government representative. An EU representative confirmed that he expected talks to continue on Monday.

EU negotiator Michel Barnier had previously written on Twitter after another meeting with his British colleague David Frost that the EU wanted to continue to achieve a fair and balanced agreement with the British. “We respect the sovereignty of the UK. And we expect the same,” added the Frenchman.

According to the EU Parliament, the time for a comprehensive agreement between Brussels and London should actually expire on Monday night. Parliament had given both sides until midnight on Sunday evening to present an agreement. Otherwise, from Parliament’s point of view, there will not be enough time to examine the text and ratify it for entry into force on January 1st. Should an agreement be reached in the coming days, it could, however, come into force for the time being and only be ratified later by the EU Parliament.

Great Britain left the EU on February 1, but the country will remain in the EU internal market and the customs union until the end of the year. The time for the timely ratification of the trade agreement for the subsequent period is now extremely short. Without an agreement, customs duties would be levied in mutual trade at the turn of the year – with serious consequences for the economy.

The main points of contention for months have been fair competition, the control of a future agreement and access to British waters for fishermen from the EU. While there had been significant progress recently on the first two sticking points, the fishing question remained difficult until the end. According to diplomats, Barnier had recently offered that EU fishermen would forego a fifth of the value of their catch in British waters after a seven-year transition period. However, Great Britain demands that EU fishermen should give up 60 percent over a transition period of three years.

According to diplomats, Barnier’s proposal was his last offer to the British. British Health Secretary Matt Hancock said on Sky News on Sunday that he was sure an agreement could be reached with the EU. It is now up to the EU to “get things moving” because they have made “unreasonable demands,” added Hancock.

Germany: Laschet calls for the defense of democracy – region

Three arrests and fines during Carnival in Lucerne

Further measures at Semmering due to the women’s World Cup