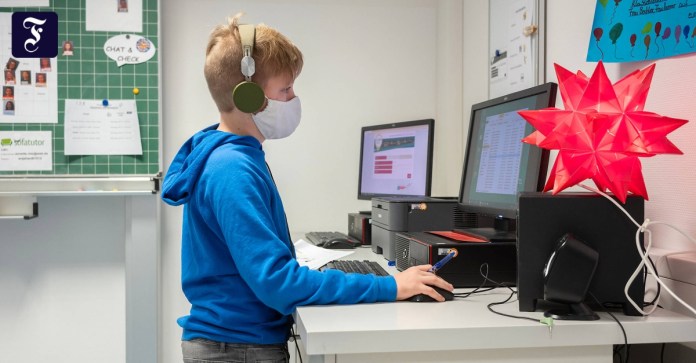 Mith great unity, the federal and state governments have agreed on tough measures to contain the pandemic. When it comes to school and daycare, however, the procedure is less strict and closed than it appears at first glance. In the period from December 16 to January 10, children should be cared for at home “whenever possible”, schools would be “closed in principle, or compulsory attendance will be suspended”, says the Chancellor’s decision with the heads of government of the federal states .

Political correspondent for Hesse, Rhineland-Palatinate and Saarland, based in Wiesbaden.

Very few countries have opted for a complete closure. Bavaria issued one of the strictest regulations, schools and daycare centers are closed there from Wednesday – except for emergency care for everyone “who needs it”, said Prime Minister Markus Söder. The same applies in Berlin. Most countries, however, have opted for an intermediate route: compulsory attendance at schools will be lifted, but the facilities will remain open for the remaining days until the Christmas holidays. This is combined with urgent appeals to parents. “Please leave the children at home,” said Hesse’s Prime Minister Volker Bouffier (CDU) on Sunday after the video switch with the Chancellor. Like North Rhine-Westphalia and Rhineland-Palatinate, Hesse will leave schools open until the Christmas break. But those who are able to do so should leave their children at home, said Bouffier. If, for example, both parents worked, the children could still go to school.

In Hesse, students were given “scheduled face-to-face lessons according to the timetable” if they came to school in the three remaining days before the vacation, said a spokesman for the Hessian Ministry of Culture. Only exams that are absolutely necessary for graduation will take place in the three days. The lessons for those pupils who are still coming to school take place “neither in mixed groups nor as emergency care”. Baden-Württemberg behaves differently. The Christmas holidays are brought forward there, schools and daycare centers are closed from Wednesday on, except for emergency care.

In Hesse, however, the day-care centers will not be closed outside of their already planned company holidays over Christmas, but according to the Minister of Social Affairs Kai Klose (Greens) the operation will be reduced “to a minimum”. How exactly this is designed is decided by the carriers in accordance with the hygiene regulations. “Children, for whom a visit to their child day care offer is indispensable, receive a care offer,” said Hesse’s Minister of Social Affairs Klose.

The decision as to whether there is a need for face-to-face tuition, day-care center visits or emergency care is left to the parents everywhere – with the indication that the federal government will create the possibility of taking paid leave. In some countries, there was talk of “extended emergency care” on Monday. With these resolutions, the decision whether to send the children to school has been pushed on to the parents, criticized the Education and Science Union (GEW) in Hesse promptly.

Santa Claus is “immune” to the virus and is allowed to...

Full closure of the A7 in Hamburg planned until Monday morning...

The Geissens: Despite Corona – Carmen and Robert want to travel