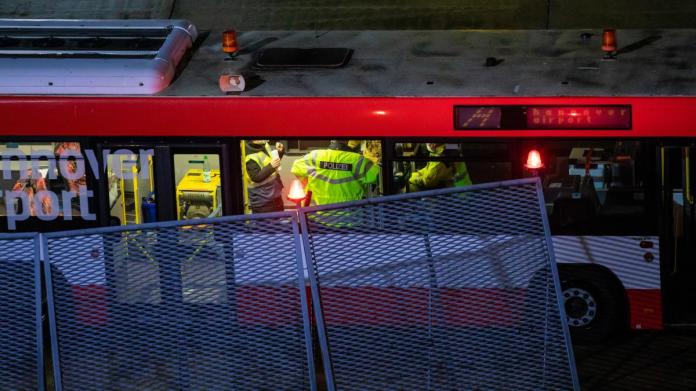 AUs concern about a new and more contagious variant of the corona virus, the federal government, like many other European countries, has imposed a ban on flights from Great Britain to Germany. The flight ban has been in effect since midnight. Federal Health Minister Jens Spahn said the mutated variant had not yet been detected in Germany. But you take the reports from Great Britain very seriously. “We are in intensive exchange at all levels, including with our European colleagues,” said the CDU politician in the ARD program “Report from Berlin”.

For flight passengers from London, this had drastic consequences at several German airports on Sunday evening:

According to information from Hanover Airport, camp beds were set up in Terminal D, and passengers are also fed there. A spokesman for the federal police said a woman wanted to fly back to London, in another case this still needs to be clarified. All others would have to undergo the so-called PCR test. “Great common sense” prevails, the travelers showed “a good deal of understanding for the measures,” emphasized the spokesman. Nevertheless, it will take some time before the test results are available.

Compared to WELT NACHRICHTENSENDER, some passengers stuck in Hanover described the situation significantly differently. “The police locked us up here. Children are screaming, people are desperate, ”one passenger describes the tense situation.

Late on Sunday evening, the health department was still busy with the tests. “Our goal is to prevent the new type of virus from moving unnoticed to Lower Saxony,” said Andreas Kranz, head of the public health department in the Hanover region.

Germany largely stops flights from Great Britain, landings from the country have been prohibited since midnight, according to an order from the Federal Ministry of Transport. Accordingly, pure cargo flights are excluded. According to British authorities, the virus mutation is up to 70 percent more contagious than the previously known form and is spreading rapidly, especially in London and south-east England. In order to contain the virus, there is a shutdown with curfews in London and large parts of south-east England, including over the Christmas period. More than 16 million people are affected. Other European countries are also arming themselves with flight bans and border closings against the virus variant.

However, if there is uncertainty as to whether a positive test result is a mutated form of the virus, the patient will be separated in a special quarantine hotel, announced Kranz. The health department worked together with the Red Cross, the technical relief organization and the federal police at the airport.

Corona tests for passengers from Great Britain at Stuttgart Airport

The security precautions at Stuttgart Airport have also been increased. Travelers from a plane from London that arrived on Sunday evening were brought in small groups to the airport’s corona test center and tested there, a spokesman confirmed. Then – if the result was negative – they could have picked up their luggage and driven home, but would have to go into quarantine there. It is not known how many passengers there were.

Upon request, the Federal Police generally announced that those arriving in Germany on Sunday would be offered a corona test and that they would be informed of the known quarantine regulations of the federal states.

“We know about the resulting inconvenience for travelers, especially now in the Christmas traffic,” it said. “All partners are working flat out to ensure safe entry, but at the same time not to stress the passengers excessively.”

The Berlin correspondent for the English weekly “The Economist”, Tom Nuttall, had apparently also landed on board a plane from Great Britain in Berlin and reported something similar.

Nuttall wrote on twitterthat German passengers were allowed to enter the Berlin airport on Sunday evening, but foreign passengers first have to wait at the airport and wait for a corona test.

The police had told the foreign passengers that they were being tested: Anyone who had a negative result would not be sent back. Passengers with a residential address in Berlin, including Nuttall, were allowed to leave the airport after some delay.

North Rhine-Westphalia put the quarantine regulation for Great Britain and South Africa back into force. The quarantine obligation for travelers from the two countries even applies retrospectively from December 11th, as can be seen from the new travel protection ordinance, which was published on Sunday evening and thus became effective. Accordingly, all travelers from Great Britain and South Africa are also obliged to take a corona test, which they have to repeat after five days.

As NRW Health Minister Karl-Josef Laumann (CDU) said in a broadcast on “BILD.de” in the evening, all those arriving from Great Britain were offered a test at the respective airport on Sunday evening. No machines from South Africa landed in North Rhine-Westphalia.

Prime Minister Armin Laschet (CDU) had said with regard to the regulation on Sunday evening in the “Current Hour” on WDR television: “You know, it has been repealed for all states by the Higher Administrative Court in North Rhine-Westphalia. We will put it into effect again from midnight – especially for South Africa and Great Britain. ”In fact, the regulation was published a little later and was therefore effective – before midnight. It is initially valid until January 17th.

The passengers who arrived at Cologne, Düsseldorf and Dortmund airports with machines from Manchester and London on Sunday were made aware of the obligation to quarantine, according to Laschet.

“The Federal Police already urged all 144 people who were on this aircraft to have a test on the flight from Manchester, which landed in Cologne after 5 p.m. – and a quarantine order has been issued for these passengers individually,” said Laschet . The same thing happens at Düsseldorf Airport and Dortmund Airport. “And from midnight the flight ban will also apply to NRW.”

The head of government continues: “What comes naturally into the country are trucks that bring goods or people who arrive by car. The quarantine ordinance also applies here from midnight. “

The Higher Administrative Court in Münster had overturned the quarantine obligation for foreigners returning from risk areas regulated in the Corona entry regulation of the state of North Rhine-Westphalia. According to the court, the country had not taken into account that travelers are exposed to a higher risk of infection when returning from countries with fewer infections than at their place of residence after returning home.

The regulation stipulated that returnees from foreign risk areas must go into quarantine at home after entering North Rhine-Westphalia and not receive visits from other households for ten days. According to the new regulation, which provides for a mandatory test after five days, the quarantine is then ended if the result is negative.

Laschet had called for an entry ban for travelers from Great Britain on Sunday. The Union politician wrote on Twitter that Belgium and the Netherlands had already stopped air and train traffic. “In order to prevent alternative trips via Ddorf, Cologne or F / M, we need a quick entry ban, preferably European,” says Laschet. The mutation of the Sars-CoV-2 coronavirus discovered in the south-east of England is said to be significantly more contagious.

Energy – Stuttgart – Defense pleads in the Windreich process in...

Pre-order and buy PS5 from Amazon: The state of affairs at...

Residential city of Stuttgart-Asemwald: The trio will probably remain a trio...