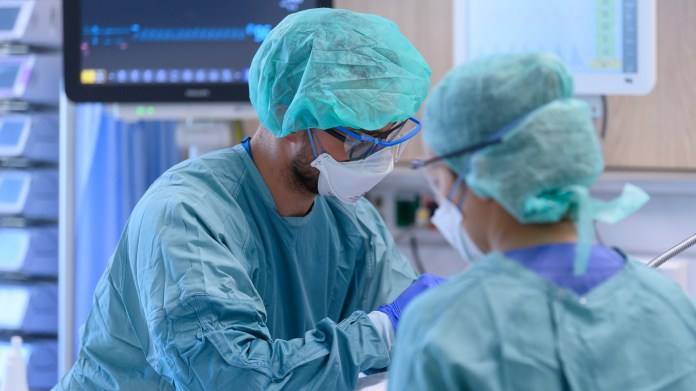 Never before have so many deaths been reported in Germany within 24 hours since the start of the corona pandemic. The number of new infections also remains at a high level at 17,270 – but fell compared to the previous week.

In Germany, the health authorities reported 487 coronavirus-related deaths to the Robert Koch Institute (RKI) within 24 hours. This is a new record since the pandemic began, according to the RKI figures. The previous high was reached on Friday with 426 deaths.

A total of 17,270 new infections with the coronavirus were reported within 24 hours. That is around 1400 fewer than in the previous week, in which 18,633 new cases were added on Wednesday. The number of daily deaths had tended to go up recently, which was expected after the steep increase in new infections.

According to the RKI management report on Tuesday, the so-called seven-day R-value was 0.89 (previous day: 0.91). This means that 100 infected people infect 89 other people. The value represents the occurrence of the infection eight to 16 days ago. If the value is below 1 for a longer period of time, the infection rate subsides.

Meanwhile, Federal Health Minister Jens Spahn has dampened hopes that corona rapid tests will be available in all old people’s and nursing homes by Christmas. “Can I promise that every nursing home will have one on December 24th? No,” Spahn said on Tuesday WDR in a double interview that was conducted with him and the NRW Prime Minister Armin Laschet. He wants to be honest about that.

Tests are already available, but not enough everywhere, says Spahn. But that will improve step by step. A quick test could mean “additional security” for visiting relatives. The other corona rules are not repealed.

There is no rush for shops in Berlin on Advent Saturday

FCN disappointed against St. Pauli! The live ticker for after...

Apple warns of effects on pacemakers