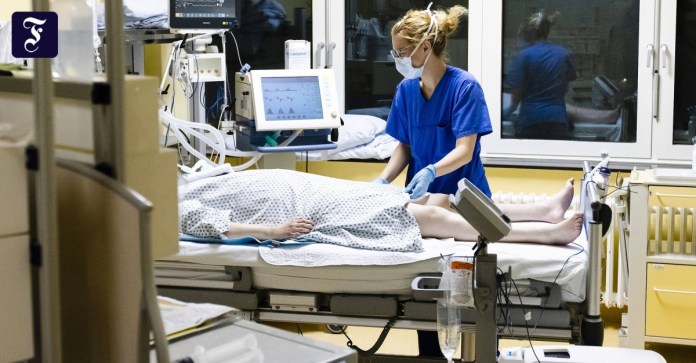 Dhe number of coronavirus-related deaths reported within 24 hours has skyrocketed and has reached a new high. The German health authorities reported 590 new deaths within one day to the Robert Koch Institute (RKI), according to the RKI figures from Wednesday morning. That is over 100 cases more than the previous record of 487 deaths last Wednesday.

A total of 20,815 new infections with the coronavirus were reported within 24 hours. On Wednesday in the previous week, the value was 17,270. The highest daily value so far was on November 20 with 23,648 cases. The number of daily deaths had tended to increase recently, which was expected after the steep increase in new infections. The total number of people who died with or with a proven infection with Sars-CoV-2 rose to 19,932 on Wednesday.

“I could hardly think of a better time of the year”

For all of Germany, the RKI also gave a new high of 149.1 new infections per 100,000 inhabitants in seven days. At the beginning of the partial lockdown in November there were around 120. The federal and state governments want to achieve that there are fewer than 50 – so health authorities could track infection chains again. The RKI has counted 1,218,524 detected infections with Sars-CoV-2 in Germany since the beginning of the pandemic. It is estimated that around 902,100 people have now recovered.

Meanwhile, calls for new and stricter corona restrictions are getting louder in the post-Christmas period. After the National Science Academy Leopoldina, more and more politicians are pleading for drastic restrictions to be imposed in the fight against the high number of infections after the holidays. In Bavaria, stricter rules such as exit restrictions, alcohol bans in city centers and curfews in hotspots apply from this Wednesday.

North Rhine-Westphalia’s Prime Minister Armin Laschet (CDU) advocated using the time after Christmas to largely shut down public life. “After Christmas we need a real New Year lockdown in order to develop a perspective towards more normality again for 2021,” he told the German Press Agency in Berlin. “From Christmas to the end of the holidays in the new year, the country can most likely shut down completely and thus effectively stop the spread of the pandemic,” Laschet emphasized. “At the same time, we are keeping the damage to educational opportunities for children as well as to the economy and jobs lower than in any other time of the year.”

Vaccination according to the Ikea principle: Berlin wants to supply around...