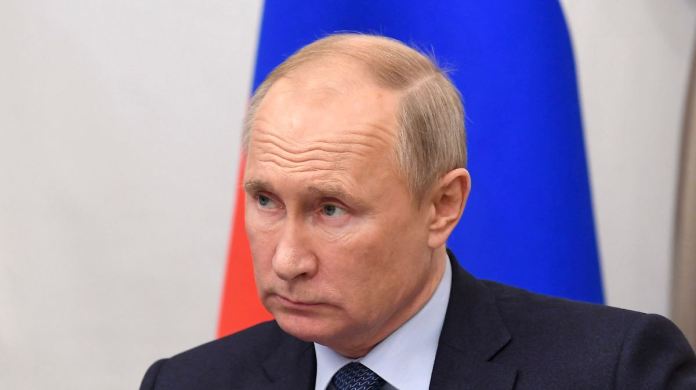 The Russian president’s Parkinson’s and cancer rumors come from a dubious source. It is different with the thesis that a St. Petersburg millionaire is Putin’s daughter.
There are increasing rumors about Vladimir Putin. According to a questionable historian, the Russian president is said to be seriously ill and is planning to resign. There is no evidence to support this claim. But at the same time, an investigative research is making the rounds in Russia, which connects Putin with an unusual millionaire.

It was not until the summer that the now 68-year-old had his fellow citizens decide in a constitutional referendum whether he could theoretically run for president of Russia beyond his term of office, which expired in 2024. At the beginning of November the British tabloid “The Sun” reported the alleged sensation: According to the Russian historian Valery Solowej, Putin is said to be seriously ill with Parkinson’s and is planning to resign as early as 2021.

In Russia, these rumors have received little media coverage. “This is utter nonsense,” commented Kremlin spokesman Dmitri Peskov. “Putin is fine, his health is excellent.” In fact, there is no evidence whatsoever to support the claims of Kremlin critic Solovey, who until last year taught at MGIMO, Moscow’s famous university for the training of young diplomats. The historian, former chairman of a nationalist party, likes to shine with questionable inside knowledge anyway.

In 2016 he correctly predicted the important personnel changes in Putin’s presidential administration. In the meantime, however, his information no longer enjoys a high reputation. Not without good reason: At the beginning of the corona pandemic, he reported about the astronomical numbers of Russian corona infected people at the time. Most recently, in an interview with the Ukrainian journalist Dmytro Gordon, Solowej claimed that he was a member of an important transnational secret organization that is supposedly more powerful than the Kremlin itself. This statement was laughed at in almost all political camps in Russia.

A millionaire from St. Petersburg

But although Solovey’s alleged revelations are unlikely to be true, rumors about Vladimir Putin are an integral part of Russian political culture. That is only logical, because the Kremlin chief treats his state of health and his family as absolutely taboo subjects. That is why a coughing attack by the Russian President two weeks ago during a government switch became a topic in local media.

The only real indication of possible health problems for the president is that he has rarely left his residence in Novo-Ogaryovo near Moscow since the beginning of the corona pandemic. Even close friends who want to meet Putin have to go through a two-week quarantine beforehand, according to the BBC.

The research of the Russian investigative medium “Proekt”, which suggested a connection between Putin and a multimillionaire with a highly unusual career, made bigger waves. Until 2000, Svetlana Kriwonogich is said to have lived with her mother in a small apartment in St. Petersburg. She is now one of the shareholders of Bank Rossija, owns expensive real estate in Moscow, St. Petersburg and Sochi and allegedly holds a 75 percent stake in a ski resort that Putin likes to visit, according to media reports.

Kriwonogich’s net worth is estimated at around $ 100 million. But how can this success story be explained at all? “Proekt” asked her neighbors, friends and acquaintances. Two neighbors claimed that Kriwonogich met a rich man in the 1990s. One of them said that at that time, like Putin, this man had worked in the city government of St. Petersburg. Two other sources directly claim that this man’s name is Vladimir Putin.

The investigative medium “Proekt”, which is headed by the former editor-in-chief of the independent Russian television broadcaster Doschd (“Regen”) and is regarded as renowned in the critical media landscape, further emphasizes that the relationship between Putin and Kriwonogich began even before Putin’s first term as president continued until the late noughties. Further evidence includes a joint flight between St. Petersburg and Moscow in 1999. In addition, Kriwonogich’s daughter was born in 2003. The father’s name was missing from the documents that were available to “Proekt”. But the daughter bears the so-called father’s name Vladimirovna, which suggests that her father is called Vladimir.

There is no evidence

The journalists did not want to publish a photo of the daughter for ethical reasons, but the girl is said to have “phenomenal resemblance” to Putin. In any case, Kriwonogich’s job at Bank Rossija is more interesting, where her own company owned almost three percent of the shares in 2018. Although Rossiya is not one of the largest banks in Russia, it is of huge importance as a kind of personal bank for the most important Russian officials. The most important shareholder in Rossiya is one of Putin’s closest friends, Yuri Kovalchuk. That is why the USA imposed sanctions on the bank after the annexation of the southern Ukrainian peninsula of Crimea in March 2014.

Anyone who has to do with the money of Putin’s close environment is usually closely connected to the president himself. It is all the more astonishing that Swetlana Kriwonogich is a completely unknown woman in this game. “Proekt” is also lacking crystal clear evidence. But the reaction of those in the opposition, who were skeptical about Solowej’s alleged revelations, is completely different. “This is the text of the year,” tweeted the informal leader of the Russian opposition, Alexei Navalnyj.

Everything is denied in the Kremlin itself. “Money-colored tabloid journalism,” said Putin’s spokesman Peskow. The allegations are “factually unfounded”. But that doesn’t mean anything: Almost everything that is known about the family of the Russian head of state first came to light through research by journalists – including the separation from his wife Lyudmila in 2013, who is the mother of his two official daughters Marija Voronzowa and Katerina Tichonowa is. One is setting up a genetic medicine research clinic, the other is head of an artificial intelligence institute at Moscow State University MGU. Both occupy positions that you would not be able to reach in Russia without close contact with the absolute top government. A similar career is at least conceivable for Swetlana Kriwonogich.

“The white village” in the Drachengasse theater

Schools should remain closed: the measures of the lockdown extension at...

Corona mortality: Covid-19 and flu – more people die from this...

Juventus in the Champions League – The big puzzle about Andrea...

Diego Maradona: The turbulent love life of the football legend