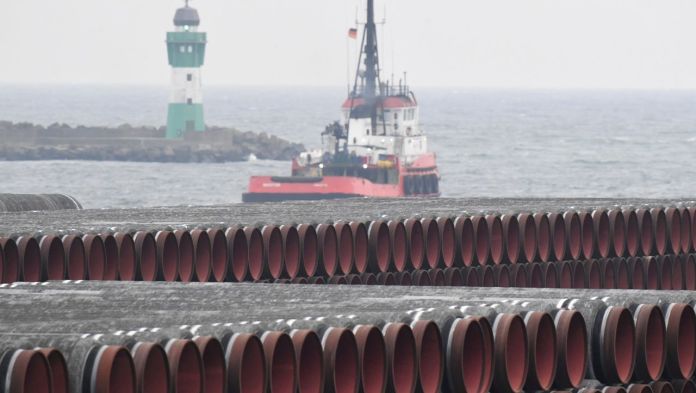 Even after the upcoming change of power in the White House, Federal Foreign Minister Heiko Maas does not want to give way in the dispute over the Nord Stream 2 Baltic Sea pipeline. “We don’t need to talk about European sovereignty if it means that in the future we will only do everything as Washington wants,” said the SPD politician with a view to the replacement of US President Donald Trump by Joe Biden. “The federal government will not change its position on Nord Stream 2.”
The gas pipeline from Russia to Germany, which is twice 1200 kilometers long, is 94 percent complete. The US is still trying to stop them with sanctions and is also threatening German companies. The Americans justify their rejection of the project on the grounds that their European partners are too dependent on Russian gas. Pipeline proponents accuse the US, on the other hand, of only wanting to sell their liquefied gas better in Europe.
Biden rejects Nord Stream 2 like Trump. Maas said that there will continue to be topics in the future on which there is a difference of opinion with the USA. “It is important that we have a common line on the central strategic and geopolitical issues, that we are on the same side of the field.”
During Trump’s four-year reign, German-American relations had sunk to a low point due to numerous controversial issues. The federal government is now promoting a new beginning. Trump had accused Germany of investing too little in the military, among other things. Here, too, Biden is not expected to change course.
Maas acknowledged NATO’s goal, according to which each member state should spend two percent of its gross domestic product on defense. But he also emphasized that in the wake of the Corona crisis, all states would have to reorganize their finances. “Then we will have to talk about what that means for the path we have chosen and for the goal as a whole.”

Too little vaccine, too lame, too unclear?

Not only lungs affected: Covid-19 affects the entire organism

Revenge or justice? – Streamer plans to sue after banning...

Buy a PS5: Today console supplies from Saturn and MediaMarkt?

Tiger bit off woman’s hand while trying to stroke her in...

Sky is showing these games live on TV and live stream...