The European Investment Bank (EIB) has again carried out its annual survey on investment activity and finance. This shows that the pandemic crisis is having a very negative impact on investments by Austrian companies.

54 percent of companies in Austria state that they will invest less than originally planned due to the pandemic – 45 percent across Europe. Large companies are more inclined than SMEs to cut their investment plans (62 percent versus 47 percent). Companies in Austria are also skeptical about the near future. They have become significantly more pessimistic about the business climate, the business outlook in the industry and the availability of internal funding. When asked about long-term investment barriers, almost eight out of ten companies (77 percent) consider the uncertainty about the future to be the biggest stumbling block. Here, however, the proportion is still below the EU average (81 percent), although it has increased compared to last year’s survey (of 65 percent).

65 percent of all companies in Austria have fully or partially introduced the digital technologies they were asked about. The proportion is particularly high among large companies (77 percent). The survey also shows that 55 percent of Austrian companies across sectors consider the increased use of digital technologies to be the most important long-term consequence of Covid-19. This puts them slightly above the EU average of 50 percent.

According to the survey, 39 percent of Austrian companies developed or introduced new products, processes or services as part of their investment activities in the past year. This corresponds roughly to the European average of 41 percent. Almost 20 percent state that they have developed or introduced innovations that were new to the country or the world market. When it comes to future investments, companies affected by the pandemic in Austria prioritize new products and services to a lesser extent than the EU average (22 percent compared to 30 percent) and as unaffected companies (29 percent).

Climate change as an opportunity?

A high proportion of Austrian companies (57 percent) have already felt the effects of physical climate risks. Almost one in five companies (19 percent) said these effects were significant. A significant number of companies in Austria regard the climate change as an opportunity rather than a risk. More companies in Austria expect the transition to a low-carbon future to be more positive than negative for their reputation (22 percent) and market demand (19 percent), but that the next five years will have a more negative than positive effect on their supply chain (-15 Percent). Almost seven out of ten companies (69 percent) have already invested in measures to counter the effects of weather events and to reduce CO2 emissions, or are planning to do so for the next three years. This roughly corresponds to the EU average of 67 percent. When asked about improvements in energy efficiency, 49 percent of Austrian companies said they had already invested in such measures in the last financial year. “The pandemic is dampening investments, so that Europe may be less able to cope with the challenges of the 21st century “said EIB Vice-President Thomas Östros. “We need a coordinated European approach to overcome the uncertainty – now, but also for the time after the recovery. This applies not least to the climate change and digital change. As the EU’s climate bank and one of Europe’s largest investors in innovation The EIB Group can play an important role in addressing these challenges and helping to get investments off the ground. ”

Rally continues: New record: Bitcoin rises to 28,500 US dollars for...

Why David Alaba is not allowed to celebrate Christmas in Vienna 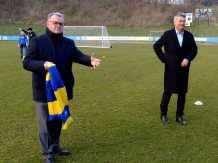