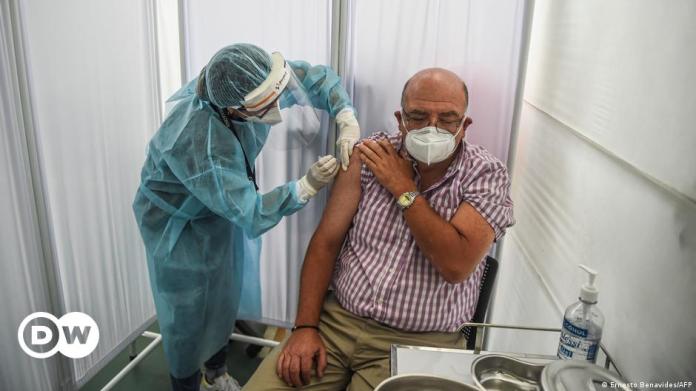 The Peruvian State Health Authority announced that a test person had difficulty moving his arms. Research director German Malaga told journalists that the problem had been reported to the supervisory authority. It could be called “Guillain-Barré Syndrome”, a rare and non-contagious disease of the nervous system that affects the movement of the arms and legs.

Similar cases of swine flu vaccinations had occurred in the United States in the 1970s. Around 450 people showed symptoms of the “Guillain-Barré Syndrome”, which can also include paralysis.

The clinical trial for Sinopharm’s corona vaccine candidate should be completed this week after testing with around 12,000 people. If the outcome is successful, the Peruvian government has announced that it will buy up to 20 million doses of the drug. This could immunize two thirds of the population.

No information on safety and effectiveness

Sinopharm uses the inactivated virus method to manufacture vaccines. This means that the active ingredient does not have to be cooled as much as the BioNTech-Pfizer vaccine and is therefore easier to transport and store.

However, like other Chinese manufacturers, Sinopharm has not yet published any data on the safety or effectiveness of its serum. The reputation of Chinese vaccine manufacturers has also suffered after scandals surrounding expired or poor quality products.

Peru is one of the countries with the highest per capita death rates in the pandemic. As of Friday, the South American state’s health authorities recorded a total of 979,111 infections and 36,499 deaths related to the coronavirus. The pandemic has hit the economy in the country hard.

The United Arab Emirates (UAE) had already approved Sinopharm’s vaccine for widespread popular use this week. In the decisive third phase of the study, an effectiveness of 86 percent was found, said the Ministry of Health in Abu Dhabi.

The UAE had also made vaccination doses available to their ally Egypt. It was a gift from the United Arab Emirates, announced the Egyptian Minister of Health Hala Sajid on Thursday after the arrival of the cargo in Cairo, as reported by state media. The vaccine should be made available to citizens free of charge.

Egypt was the first African state to receive the Chinese vaccine, Sajid said. According to the Al-Ahram news site, the Ministry of Health said the country had received a total of 50,000 doses of the vaccine.

Valentino Rossi warns of the dangers after Fausto Gresini’s death

Reports: Corona vaccinations in medical practices decided by April at the latest – politics EM 2021 is supposed to not be played in twelve countries

Robbery in the Green Vault: Here the police catch the Remmo...

Upamecano changes to FC Bayern – Richars is likely to come...

Angela Merkel warns of a third wave after the Corona summit