In the meantime, pharmacies in Upper Austria and Vienna already offer a few PCR gargle tests, which are also recognized by the authorities.

The service is now to be expanded rapidly in both federal states. The tests cost between 145 and 150 euros, depending on the laboratory and sample logistics, informed the Chamber of Pharmacists on APA request. 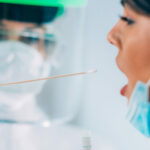 In ten pharmacies in Linz, the PCR gargle tests have been available since October, reported Thomas Veitschegger, President of the Upper Austrian Chamber of Pharmacists, and now they want to roll this out to the entire state.

40 to 45 pharmacies are expected to follow suit soon. In Vienna, too, the aim is to gradually expand the range of services that have only been available in isolated cases so far.

During the tests, you gargle under the supervision of an employee. Since the identity is also determined and the test is evaluated in a laboratory, the result then also applies to the health authorities – unlike tests from markets, as Veitschegger emphasized.

Coronavirus: The Thurgau vaccination ship docked in Kreuzlingen – those responsible...