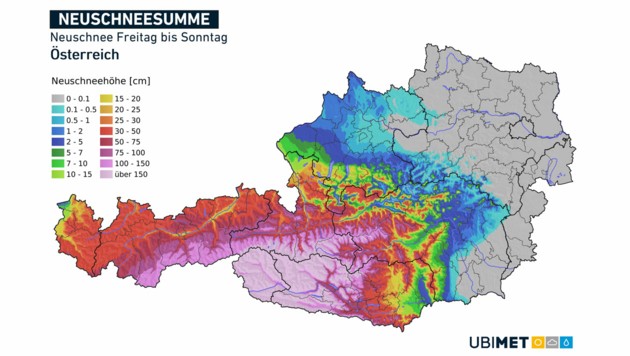 In the Lesachtal and Upper Mölltal area, heavy snowfall will occur with a high potential for danger. According to the weather forecast, up to two meters of snow can be expected in the west of Carinthia. According to experts, the greatest amounts of precipitation should be in Upper Carinthia. We are talking about 100 to 150 liters per square meter of precipitation. In the Carnic Alps it can even be up to 350 liters per square meter.

The heavy rains are expected to impair the infrastructure (traffic, energy supply). Mudflows and water ingress into buildings are possible. Floods and flooding can occur near water bodies. Roads and railways can be impassable.

ÖBB closed the Tauern line
Starting today, Friday, the ÖBB will block the Tauern route from Spittal-Millstättersee to Schwarzach-St. Vitus. According to ÖBB, the weather conditions would mean that “in this situation, no scheduled rail operations” would be expected. The route from Lienz via Sillian to San Candido-Innichen will also be closed. A rail replacement service with buses is set up.

The operation of the Tauern lock will also cease on Friday from 5.30 p.m. – as will local traffic to Mallnitz. The ban applies up to and including Monday. “All local and long-distance traffic connections as well as freight train traffic are affected,” it says. Starting tomorrow, Saturday, there will be rail replacement services for long-distance trains from Villach via Spittal-Millstättersee to Bischofshofen.

Delays are to be expected
According to ÖBB, the route between Spittal-Millstättersee and Lienz will remain open for the time being, and the railway line over the Brenner will also remain open for the time being. Due to the weather, there could be constant delays – passengers should therefore find out more before starting their journey at oebb.at or at ÖBB customer service on 05/1717.

Avoid unnecessary car journeys
Until Saturday morning there will often be snowfall down to the deepest elevations, after which the snowfall limit rises. Trees and large branches can break under the snow load. Avoid unnecessary car journeys, keep your distance from torrents, rivers and flooded areas, avoid flooded underpasses and ditches, avoid outdoor activities, especially in alpine terrain, close windows, doors and skylights in the house and inform yourself about flood warnings.

Vincent Kriechmayr knows how to tame the “Streif” in the second...

These are the biggest fashion trends in 2021

These German regions are developing worryingly

Forbes 2020 list: Kylie Jenner hangs them all out – folks