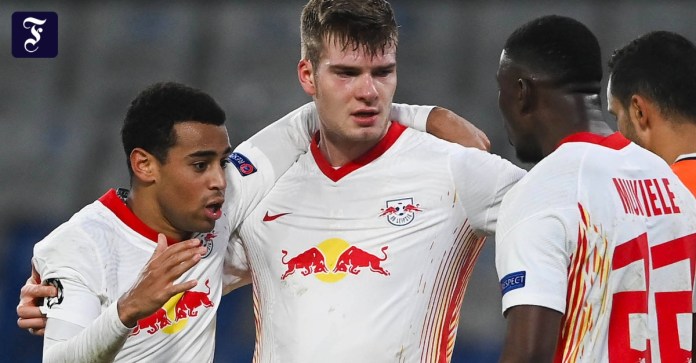 Dhe last sixteen of the Champions League firmly in its sights: In a heart-stopping final, RB Leipzig celebrated a 4-3 win at Istanbul Basaksehir in stoppage time. Yussuf Poulsen (26th minute), Nordi Mukiele (43rd), Dani Olmo (66th) and Alexander Sörloth (90th + 3) scored for the Saxons, who will now win the next Tuesday against Manchester United the ticket for the Can solve knockout round.

First Alexander Sörloth stoically took note of his long-awaited goal, then the Norwegian laughed after the final whistle to the cheers of his teammates. In Istanbul, of all places, where he had already scored in stoppage time for his former club Trabzonspor last season, the knot of the € 20 million purchase burst with the winning goal in stoppage time. “The goal takes a lot of pressure off me. Now I can concentrate on my game, ”said Sörloth.

A two-time two-goal lead almost wasn’t enough. This was not only due to the increasing passivity of the RB professionals, but also to the sometimes naive defensive behavior. The first and third goals of the Turks after set pieces were completely avoidable. “We defended way too aggressively near the goal. We have to do better, ”said Nagelsmann.

Leipzig should have led 2-0 after just six minutes. The usury of opportunities ran through the entire first half, in which RB would have already decided the game and, as a result, could have saved energy. “If you look at the statistics, we should have decided the game earlier. We’re making it unnecessarily exciting. We have to stop that because it will be difficult against better opponents, ”said captain Marcel Sabitzer.

With Manchester United’s 1: 3 against Paris Saint-Germain, Leipzig needs a win against the British on Tuesday to advance on its own. “We now have our final against Manchester, which we absolutely wanted to reach,” said Nagelsmann. Then the coach has to do without the yellow-banned Dayot Upamecano.

The three groups with priority for corona vaccinations

“That is an absolute record” | Frankfurt

Pensioners in Germany: number grows to 1.34 million – and with...

This is how Princess Amalia celebrates her birthday