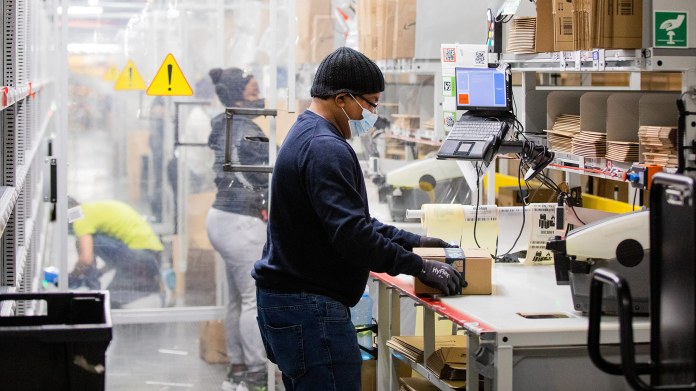 Amazon has asked the US government to give its employees preferential treatment for corona vaccinations. Meanwhile, it is said to have been infected with the corona virus in German Amazon centers.

Following an emergency approval, the United States launched a major vaccination campaign against the Covid-19 disease on Monday. If it were up to Amazon, its employees should be among the first to get involved here.

In a letter, Amazon asked the US government to give priority to important employees such as its warehouse and data center employees for vaccination.

Home office is no alternative

You could not work from home, wrote senior manager Dave Clark in a letter to the US epidemic agency CDC, which the Reuters news agency received. The e-commerce giant employs 800,000 people in the US alone – that’s more than the population of Frankfurt am Main.

Meanwhile, Amazon is not alone with its demand: the US National Retail Federation had submitted a similar request.

ver.di calls for intervention by the authorities

Meanwhile, the ver.di union reported that there was an infection with the corona virus in Amazon’s German sorting and shipping centers. This week alone, dozens of infections in Garbsen near Hanover, in Bayreuth and in Borgstedt in Schleswig-Holstein became known, the union said and called for the authorities to intervene.

Amazon said that “the health and well-being of our employees have top priority” for the group. In Germany alone, Amazon has ordered, among other things, “more than 470 million units of hand disinfectant, 21 million pairs of gloves, 19 million masks, face protection or other mouth and nose protection”. The health authorities had visited the Amazon building several times and confirmed to the company that it had created a “safe working environment”.

Only then can it be concluded whether there is actually an increase in corona infections in the Amazon center, i.e. whether it is a hot spot, or whether the illnesses of Amazon employees simply reflect the infection process in the region.

“Job advertisements back to pre-crisis level”

The latest on the corona crisis – Italy declares the holiday...

The precious metal reacts negatively to the corona vaccine

Leaks reveal many specs about Intel Rocket Lake-S, from the Core...

MontanaBlack: Caseless on Instagram – does this photo go too far?

Sky or DAZN as Prime Channel from summer?

Jesse Marsch: “It was an important moment for our season”