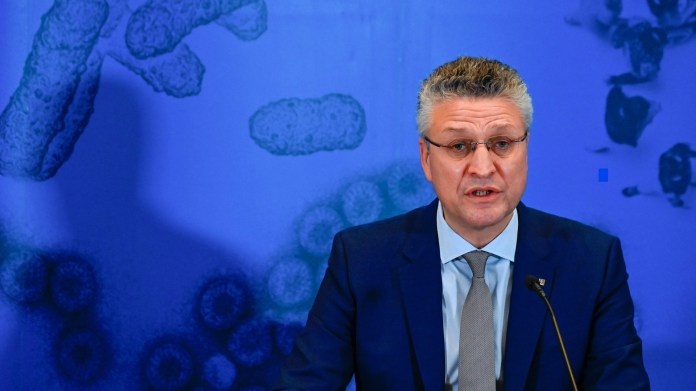 The number of new corona infections and deaths in Germany recently reached new highs. This development worries the RKI boss Wieler. He warned of the return of exponential growth.

The President of the Robert Koch Institute (RKI), Lothar Wieler, considers the recently registered increase in new corona infections to be “worrying”. “The situation is still very serious,” said Wieler at the RKI press conference, and it has worsened since last week. The plateau you are on is “extremely fragile”. “The infection process can quickly turn over again,” warned Wieler that there could quickly be an exponential growth in new infections in Germany. You have to prevent that.

Wieler explained the situation by saying that the corona virus was very common in the population. It is therefore all the more important to comply with the protective measures. According to the RKI, the situation in old people’s and nursing homes is particularly difficult. There are currently almost twice as many outbreaks there as in spring. On average, almost 20 people are affected per outbreak.

The RKI sees big differences within Germany: In some regions it is apparently more successful than in others in preventing infections. “This shows that infection protection measures work when they are implemented effectively,” said Wieler. The head of the RKI situation center, Ute Rexroth, added that the situation in Thuringia and Saxony is particularly worrying.

In Wieler’s view, partial lockdown is not enough to get the situation under control again. The contacts of the population should be reduced by at least 60 percent, the current 40 percent are too few. With a hard lockdown, Ireland and Belgium had successfully reduced contacts by more than 60 percent and thus reduced infections. In Germany, too, there is no good alternative to tougher measures unless the contacts are significantly reduced beforehand.

There are also calls for tougher measures from politics. CSU regional group leader Alexander Dobrindt considers it urgently necessary to clearly reduce the number of contagions before the holidays: “In order to then experience Christmas closer to normal.” When things get tough before the festive season, Dobrindt has an eye on schools in particular, as he does in the ARD morning magazine explained: These could move on to distance learning or shared classes.

The SPD health expert Karl Lauterbach, who in an interview with the ARD capital studio demands: “Among other things, schools should be closed as soon as possible, preferably at the beginning of next week.” In addition, alcohol should be banned in public places and citizens should be urged not to travel. Only small Christmas parties should be allowed, indoors preferably with a mask.

Tighter measures after Christmas are more and more likely

When the next meeting of the country leaders with Chancellor Angela Merkel on corona measures has not yet been determined. Merkel had also called for stores that were not urgently needed to be closed by January 10 after Christmas.

It seems increasingly likely that public life will be shut down almost completely from Christmas onwards. In any case, Bavaria’s Prime Minister Markus Söder is also promoting closing not only schools, but also many shops by January 10: “Just shut everything down. From shops to company holidays. If everyone participates, it would be That’s great. We’ll never find a better time than the one until January 10 during the whole year. “

The number of new coronavirus infections had recently reached a new high in Germany: The health authorities reported 23,679 confirmed cases to the RKI by midnight within 24 hours. That is 1633 more new infections than were added on Thursday last week. The previous record was on November 20 at 23,648 new infections.

In addition, more than 20,000 people in Germany have now died from or with the virus. The number rose by 440 to 20,372. The previous day, a maximum of 590 deaths had been reported. The trend in the number of daily deaths had recently gone up, which was expected after the steep increase in new infections.

90,000 euros fine for discrimination against men in Paris

Formula 1: The start of the season is moved to Bahrain

WAC legionnaire Eliel Peretz is out for a long time –...

Beethoven’s childhood: “What should become of you?”

Despite Corona: Samu was there for “The Voice” sing-offs

PS5 DualSense: Problems with Controller Triggers? Tips what you should...

Pablo Iglesias: A left-wing superstar throws down – to stir up...