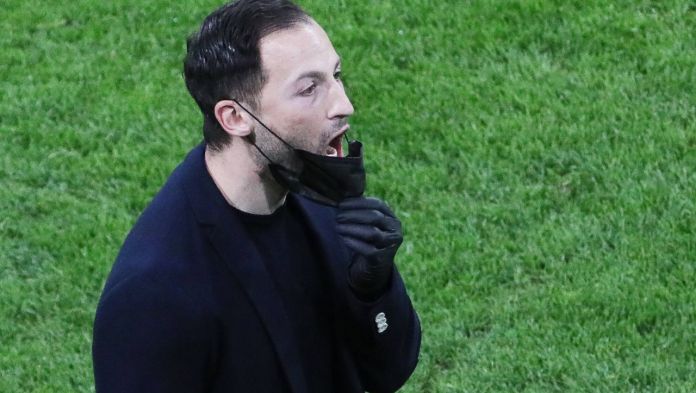 Former Bundesliga coach Domenico Tedesco was insulted in a xenophobic manner during a game in the Russian Premier League. “I was told by the opposing bank that this was their country and that I should leave it,” Tedesco said. “I’m shocked.” Such statements have no place in sport or in society, he said.
Tedesco coaches the Russian capital club Spartak Moscow, the incident occurred during a 0-1 defeat at FK Sochi on Saturday. Tedesco had a clash with Sochi’s goalkeeping coach Dmitri Borodin, who subsequently confirmed to several Russian media that he had shouted “This is our country” to the German-Italian Tedesco. This then called him a racist, said Borodin the portal “sport24”. Borodin found the guilt surprisingly in Tedesco, who had “behaved badly”, “and that was not the first time.” Spartak’s assistant coach Andreas Hinkel was also kicked during the game.
Tedesco said on Sunday it was no secret that he was an emotional trainer. But: »I really learned to love Russia during my time here. I was received in an incredibly friendly manner and with open arms. “Even if not everyone loved Spartak,” I would not have thought something like yesterday was possible, “said Tedesco. “Neither xenophobia nor violence should be found in sport or in our society.”

Russian association is investigating the incident

Spartak said they were relying on an objective investigation into the incident by the Russian Football Association. FK Sochi announced that the “unpleasant incident” should be overcome as quickly as possible and that the sporting events should be brought back to the fore.

Tedesco took over Spartak in the relegation battle in October 2019 and still led the club to seventh place. This season the Muscovites are in second place behind Zenit Saint Petersburg. In Germany, Tedesco had trained Schalke 04 and Erzgebirge Aue.

VfB Stuttgart after the defeat in Wolfsburg: How Sven Mislintat wants...

Because of baby luck: “Let’s Dance” 2021 without fan favorite Massimo

Nip the spread of the mutation in the bud

Only cargo in there, no passengers: Big gulps at Stuttgart Airport...

Coronavirus in Berlin: Senate wants to reserve 500 hotel rooms for...