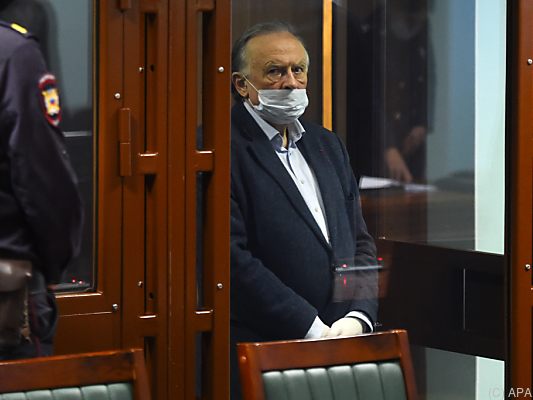 Russian history professor Oleg Sokolov was sentenced to twelve and a half years in a camp for murdering and dismembering his much younger partner. This was decided by a court in St. Petersburg on Friday. Sokolov had pleaded guilty and repented. His lawyer said on Friday that after the publication of the written judgment, he would decide on an appeal.

Prosecutors had asked for 15 years in prison for murder and illegal gun possession. Sokolov was arrested in a drunk state in November 2019 while trying to sink body parts in the Moika River in St. Petersburg. The police took the 63-year-old out of the ice-cold water and discovered severed women’s arms in his backpack. In the apartment of the renowned Napoleon expert, the officers found a blood-smeared saw and the decapitated body of his former student Anastasia Yeschchenko. Sokolov had lived with the 24-year-old and wrote several books.

The scholar, who is also known for his appearances in historical costumes, stated at a hearing shortly after his arrest that his partner had “attacked him with a knife”. For his part, Yeshchenko’s brother told Russian media that Sokolov was furiously jealous. The 63-year-old once beat up his partner when she wanted to go to a fellow student’s birthday party.

The parents of the murdered Yeshchenko were also present when the verdict was announced. Her lawyer told reporters, “nothing can bring your daughter back”. The family does not want to appeal the judgment.

The case sparked a debate in Russia about violence against women. Students at the St. Petersburg State University are said to have reported sexual assaults, some of which were violent, by the professor, without this having any consequences. According to media reports, a student who had an affair with Sokolov in 2008 said that the professor tied her to a chair, slapped her in the face and threatened to set her on fire and kill her if she left him.

In Russia, according to activists, 16.5 million women are victims of domestic violence every year. Under President Vladimir Putin, the penalties had been reduced, most of the perpetrators get away with a fine.

This is how the Cologne “crime scene” becomes: Germany – united...

Verona Pooth: Sexy snapshot from her bed – “Too hot for...

Friedrich Merz: The “Donald Trump of Germany” – Destructive judgment from...

Over 14 million recreational musicians in Germany