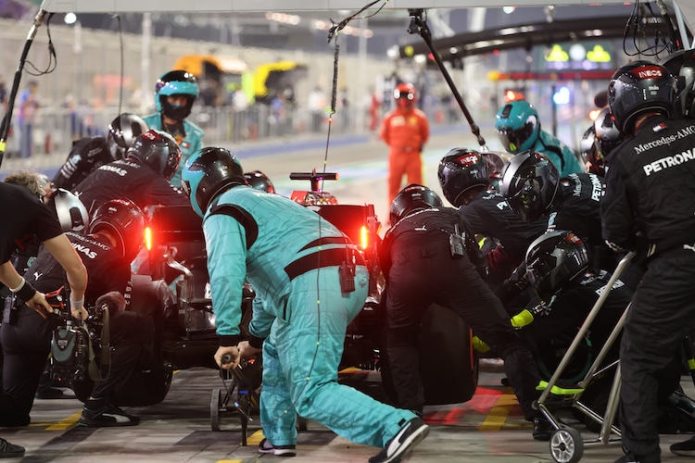 In the penultimate round of the Formula 1 season in Bahrain, a radio breakdown ensured that George Russell was sent off again with the wrong tires and Valtteri Bottas with the old tires. That raises questions.

The mishap occurred on the 62nd race lap of the Sakhir GP. Because the safety car was sent out on the track (Jack Aitken had lost the front wing in an unpleasant encounter with the track barrier), the Mercedes management decided to equip both cars with fresh tires one after the other.

“When the safety car drove onto the track, we asked the crew to prepare and bring the tires for both cars into the pit lane,” says senior Mercedes engineer Andrew Shovlin, and explains with a view to the serious radio problem which led to the tire chaos: “When this message was just being sent, another radio message prevented for a very brief moment one of the important messages from getting through to some of the guys who were collecting the tires.”

So it happened that George Russell got the front tires from Bottas and later had to come in again. Bottas, those of Russell were strapped on, then the mistake was noticed, the fresh tires came off again, meanwhile the overheated brakes began to burn, and finally the Finn was sent back on the track with the old, worn rubber.

This raises questions for track engineer and racing promoter Bob Barnard. The Australian wonders on social media: “The Mercedes tire boys are ready in the pit lane with the tires for Bottas. Whether they understood the radio message or not, they are standing there with the front tires from Bottas, who is driving the number 77 car. But the car with the number 63 comes towards them. Why don’t they stop and say something like they did with Bottas afterwards? Why do you just mount the wheels on the wrong car? “

Former 500cc team boss Peter Clifford suspects: «« I think that they are so focused on changing tires that they did not realize what happened. It was only when it was Bottas’ turn that they understood what was going on. ” Former Dunlop technician Peter Ingley objects: “The man on the left front wheel knew something was wrong.”

Mercedes Motorsport Director Toto Wolff said in his press round after the race: “If we instruct the pit crew to prepare the right tires, we will do it over the radio. And one side of the box, George’s, didn’t hear the relevant radio message. We had a radio that wasn’t working properly, so the wrong guys with the wrong tires were ready. “

Because of the radio breakdown, Russell had to head straight back to the pits to get the tires intended for him – as a result, the Briton lost the lead. Mercedes was fined by the rulers Garry Connelly, Loïc Bacquelaine, Mika Salo and Mazen Al-Hilli with a fine of 200,000 euros for the mistake.

The reasoning for the judgment says: “Usually this is classified as a violation of the sports regulations and, if necessary, even punished with disqualification. But in this case there are extenuating circumstances. First, the team corrected the mistake within one lap by pitting Russell again. Second, because of the mistake, Bottas’ stop lasted so long that the result was significantly affected. “

Aldi: No coin for the shopping cart? Discounter warns of...

Coronavirus: Chaos around the corona vaccination leads to resentment in the...

Corona: infection without even realizing it? This symptom can be...

Cyberpunk 2077: Schedule for DLCs, updates and patches at a glance