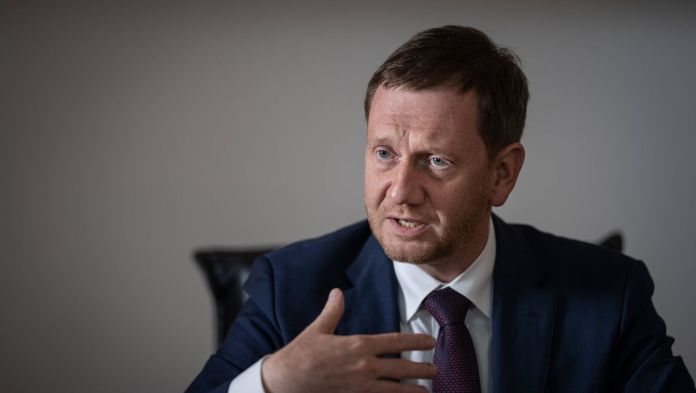 SPIEGEL: Minister-President, how did Saxony of all things become the Corona frontrunner among Germany’s federal states?

Kretschmer: This is a snapshot that will change again. It’s a wave running north. Our colleagues in northern Germany are also very concerned and are having the same discussions as we are. And they also sense that measures that curtail freedom are difficult to convey to the population.

SPIEGEL: But nowhere is the situation as dramatic as in Saxony.

Kretschmer: We hardly had any corona cases in the first wave, the summer was very relaxed. The warnings from virologists, but also from politicians, have partly been used up. It is true that personal experience does a lot more to people than intelligent analyzes. A small minority of the unreasonable has also contributed to making the situation increasingly critical.

SPIEGEL: Does Saxony still have free capacities in the hospitals?

Kretschmer: We are working to the limit, but we have a good distribution system. Patients are driven to Dresden and Leipzig from the Ore Mountains and Upper Lusatia. We are in talks with other federal states so that the distribution can go beyond Saxony if necessary.

To person
Michael Kretschmer, born 1975 in Görlitz, has been Prime Minister of Saxony and chairman of the state CDU since December 2017. From 2002 to 2017 he was a member of the Bundestag, between 2005 and 2017 General Secretary of the Saxon CDU.
SPIEGEL: Are you no longer in control of your healthcare system?

Kretschmer: We are in control of the health system, but to keep the pandemic under control, contacts need to be followed up. It is extremely difficult now. The armed forces and state employees help in the health authorities with contact tracking.

SPIEGEL: Is there still a possibility of tracking?

Kretschmer: It is not easy. Here, too, it depends on the population. If everyone is just waiting with their arms crossed for the health department to call, containment will not succeed. We can no longer take into account that people stand apart and find everything difficult. A week ago I only received letters asking me to relax further. That shows what the social mood is like. But the situation is much more dramatic than in the spring, and the population is dealing with it many times more carelessly. We must act decisively now.

SPIEGEL: Where have you made mistakes in the past that have led to the deceptive security?

Kretschmer: In the summer, the easing was absolutely right. We live under the rule of law: Germany has seen a large number of restrictions being lifted by the courts because they were not proportionate. Appropriate action must be taken, especially when it comes to restricting freedom. It’s about social acceptance that you have to achieve. But now we have a different situation.

SPIEGEL: Your neighboring country, the Czech Republic, was declared a risk area at the end of September, but border traffic was not restricted until mid-November. A mistake?

Kretschmer: Without the Czech and Polish doctors and nurses, without the Eastern European DHL employees, medical care, care in nursing homes and other economic areas would collapse.

SPIEGEL: Is there nothing that you consider to be a mistake in retrospect?

Kretschmer: There are a lot of things that I would do differently today. The spring restrictions were too tough and too long. But you are right when you say that the restrictions should have come more quickly now. The closure of nursing homes, for example. But many of those in charge also had very unpleasant memories of spring.

SPIEGEL: In October you warned of hysteria. Did you keep your Saxons safe for too long?

Kretschmer: Even in this day and age, hysteria is a very bad advisor. We see many hysterical people who think that the vaccine gives them a chip. We need to keep a cool head and we need to encourage people to support these measures. After ten months of the pandemic, many warnings have unfortunately been used up. Now it’s really serious.

SPIEGEL: You have been relying on personal responsibility for a long time. Too long?

Kretschmer: Personal responsibility is important. For example, you don’t have to push the limits of how many people are allowed to come for Christmas. You don’t have to rush into the city centers for the last remaining days.

SPIEGEL: Interestingly, the hotspots in the Free State are not the big cities, but sparsely populated rural districts. Why is that?

SPIEGEL: In the districts of Bautzen, Görlitz, the Erzgebirgskreis and the district of Meißen, the AfD was particularly strong in the past elections – the incidences there are now very high. The Federal Government’s Eastern Commissioner, your Saxon party friend Marco Wanderwitz, sees a connection. They also?

Kretschmer: It’s probably not that simple. On the other hand: Look at the statements from AfD politicians who never miss an opportunity to question the virus, its effects and the protective measures. This party provides members of the Bundestag who demonstrate without a mask. This party is mistaken – after it asked us in the spring to declare a disaster. That’s incredible. And of course there are also people in Saxony who move exclusively in this bubble and who only perceive information from these circles and feel confirmed in it.

SPIEGEL: So your fellow party member Wanderwitz is right after all?

Kretschmer: I am not a statistician. I do not want to deny or confirm this view. We have to be careful now that we don’t provide food for new conspiracy theories, the situation is stressful enough. But one thing is also clear: We discussed a lot in Saxony – and now it’s just over. We are at a very dangerous tipping point.

SPIEGEL: What do you mean?

Kretschmer: Anyone who wants to can still have a different opinion and question our measures, that’s the way it is in a free country. But that is no longer crucial, these people must now step aside. As of Monday, we will have a clear regulation that will be consistently enforced and monitored. So that in four weeks we have a significantly lower incidence and no overloading of the hospitals. Obviously we did not achieve our first goal: to keep schools and kindergartens open. But the second goal is not negotiable. Medical care must be guaranteed at all times.

SPIEGEL: These days you said on ZDF: “We have to counter the dumbing down in this country.” Who and what do you mean?

Kretschmer: This country benefits from the fact that there is scientific progress based on scientific knowledge, for example in medicine. Of course everyone can babble a bit and spread some half-knowledge at the same time, that is covered by the freedom of expression. You can also have discussions with people like that, that’s always been my approach. But we must now oppose this nonsense even more clearly and argue against it. Opinions aren’t facts, that’s the end of it.

SPIEGEL: On Sunday the prime ministers will again confer with Chancellor Merkel. What do you expect from the advice?

Kretschmer: We are now going our hard, Saxon way. That’s decided. I will advocate that one can only visit nursing homes with a negative rapid test. And that exit restrictions only make sense when schools, daycare centers and shops are also closed. Of course, the economy needs support, but that’s Peter Altmaier’s turn. And we finally have to clarify the subject of skiing.

SPIEGEL: What are you for

Kretschmer: If even the southern states of Bavaria and Baden-Württemberg are against it, then we shouldn’t open the ski areas this season. Anything else would be inconsistent given the numbers. Now we finally need a common line and planning security for everyone.

Gladbach before Kone signing: Most expensive teenager in the club’s history

Corona Bavaria: Compulsory testing for return travelers is coming – but...

Mercedes “definitely the toughest team” in the tests