The treating doctors spoke on Monday of a sprained fracture of the left knee joint, which would have torn all knee ligaments. A career continuation in top-class sport could not be conclusively answered at the moment, it was also said. Schmidhofer himself doesn’t think about quitting.

“A graduated supply concept is certainly necessary. We will first try to bring the bone back into its optimal shape, to stabilize it and then to supply some of the ligaments,” said Dr. Michael Plecko, the medical director at the AUVA accident hospital in Graz. Only after a regeneration phase could the rest of the ligament structures be reconstructed and the anterior and posterior cruciate ligament treated in five to ten weeks by means of arthroscopy. It is a serious injury, but not a “total loss”, since the blood vessels and nerves are not damaged.

“I’m very, very well looked after and I’m fine,” said Schmidhofer at a video conference from the bedside. The 31-year-old Styrian was optimistic and, as usual, combative. According to her own statements, she did not allow questions about the end of her career to approach her. “If you think how well such a good swing can fill, then that question is quickly settled.”

“Would like to go skiing again in eight, maybe ten months”

On the way back she doesn’t want to put any pressure on herself, she feels in good hands in the Graz hospital near her home. “I want to go skiing again in eight, maybe ten months. That’s my pressure on the doctors,” said Schmidhofer.

Schmidhofer flew on Friday in her first race of the season in the lower section of the route after jumping into the net, cut it with her sharp-edged skis and got stuck in the second net. “It looked a bit cool,” said Schmidhofer after studying her dramatic departure. “It looked a bit like Magic on TV … like David Copperfield. There Nici drives and there is the (camera) intersection and then Nici is gone.”

She was also sick with Corona in the preparation for the season, and ruled out a connection with the fall. “I was doing very well this week. I never felt tired of being tired, it had nothing to do with Corona.”

Ski boot had to be screwed down

Schmidhofer was conscious after her fall and then even radioed her teammates at the start. She instructed a trainer to “let me know at home,” as she said on Monday. Because of the severe pain, her racing ski boot had to be “screwed down” before it was taken away. “That was the worst moment in the last four days,” said Schmidhofer. She only claims to have received pain medication from local doctors at the insistence and request.

Schmidhofer has already had to deal with a serious injury in his right knee. In January 2016, during downhill training in Cortina d’Ampezzo, she tore the anterior cruciate ligament and tore the inner and outer meniscus in her right knee. “This time it was very, very painful. It couldn’t be compared to Cortina.”

The hope for a similar comeback was the same for the time being. At that time she came back stronger than before: In February 2017, Schmidhofer crowned her career with Super G gold at the World Championships in St. Moritz, and in March 2019 she won downhill crystal. She has entered the list of winners at four World Cup races so far – three times in the downhill and once in the Super-G.

In the past few hours, companions reminded her of bad falls like that of the Swiss Silvano Beltrametti, said Schmidhofer. This ended up in 2001 – also in Val d’Isere – paraplegic in a wheelchair. “At first I didn’t even think about him. But I watched the TV pictures of my fall and I know that I was very lucky,” said Schmidhofer.

Tufly will be flying from Germany to 14 hot water destinations...

Corona vaccine available in all counties from today | NDR.de...

SpaceX rocket goes out of control and crashes – Elon Musk... 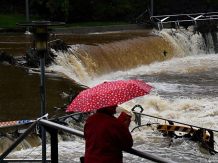 More evacuations due to flooding in Australia – world –